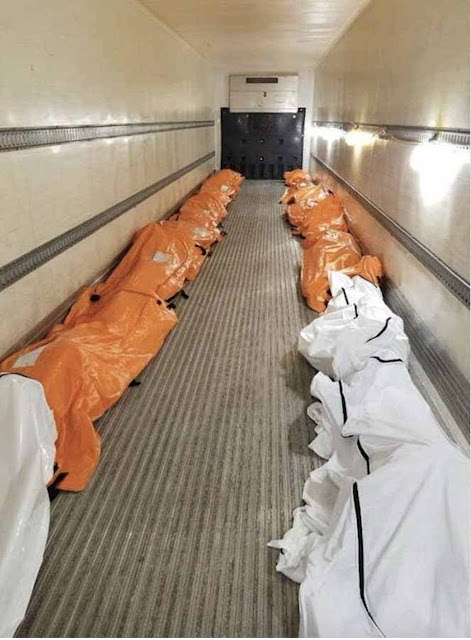 A nurse in Manhattan a shared a photograph of bodies in a refrigerated truck at a hospital
36,221 people in New York City have tested positive and 790 people have died
It is the epicenter of the virus in America; there are 142,000 cases across the country and 2,500 have died
City officials said this is the biggest deployment of makeshift morgues since the September 11, 2001, attacks
There are also field hospitals popping up in Central Park and in luxury hotels like the Plaza and St Regis
The USNS Comfort, a Navy hospital ship, will dock at New York Harbor on Monday bringing 1,000 beds
Trump said on Sunday that if 200,000 or fewer died from the virus, he would have done a 'good job'
He has extended social distancing guidelines until the end of April after consulting disease experts

Coronavirus symptoms:
what are they and should you see a doctor?

By Ryan Fahey For Mailonline

Horrifying IMAGES has emerged of dead bodies being loaded onto a refrigerated truck with a forklift outside Brooklyn Hospital in New York City where 790 people have died from coronavirus and 36,000 have been infected.

The video - which was taken by a bystander from their car - shows the bodies being loaded onto a vehicle. It surfaced within hours of a nurse sharing a harrowing photograph of bodies that had been piled into a refrigerated truck to be taken away from a different hospital.

There are makeshift morgues and hospitals popping up all over New York City, the epicenter of the virus in the US, including one in Central Park.

New York City is expecting its 'peak' in the next few weeks and there is a frantic race against time to prepare the already inundated hospital system for it when it comes.

While it is the epicenter now, experts including the White House's most authoritative voice on the subject - Dr. Anthony Fauci - say other cities will soon experience similarly distressing outbreaks.

New Orleans is expected to be the next hotspot - it currently has 1,350 cases and 73 deaths - but Fauci said on Monday he was also worried about Detroit and Los Angeles.

The president has extended social distancing guidelines until the end of April and gave the grim prediction on Sunday that if the death toll remains under 200,000 by the time the pandemic is over, he will have done a 'good job'.