WE NAMED HIM DONN


We named him Donn, but called him Donny when he was little.
He was a beautiful kid. His mother, my ex-wife, raised him,
except for a couple of years,
so when we finally met, as people, he was all grown up.
We tried to figure each other out,
and worked at getting to know one another.

At first he had resentments toward me and tried to hide them,
but we both felt something needed to be resolved.
For some reason it was hard to talk directly at the REAL subject.
I knew that he had heard a lot of things about me from his mother...

not all good.
Some were probably true.

Then he went away for a few more years before we tried again.
The next time was better.
We both had had time to think things over.
People told us we walked and laughed exactly alike.
We understood each other's humor.
We were sitting with our wives in a barbecue restaurant
on one of his visits.
We both reached for the check, and I said,
"I've never done a damn thing for you,
so I'm going to do this one thing, and then THAT'S IT!"
He said this: "Aw, gee, pops. I wanted to go to college."
We all broke up laughing.
That was the last time Misty and I saw him alive...
at least I think so.
That whole period is sort of mixed up in my mind.
He was riding his motorcycle in traffic
when the car in front of him hit the brakes.
Donn's bike hit the car and threw him.
We rushed from Orlando to Fort Lauderdale to the hospital,
and he looked perfectly healthy,
except he was brain dead.

I talked to him anyway.

After that it's all a blur.
Somebody pulled the plug and Donn died,
There was a little funeral in northern Tennessee.
I keep thinking of things I should have said and done differently.
I guess that's natural.

Maybe someday we'll get another chance to hash it all out. 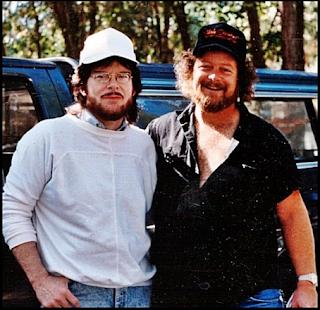