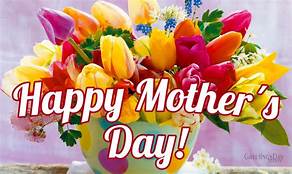 From all of us here at RaiderCountry.net

Mother's Day in the United States is an annual holiday celebrated on the second Sunday in May. Mother's Day recognizes mothers, motherhood and maternal bonds in general, as well as the positive contributions that they make to society. It was established by Anna Jarvis, with the first official Mother's Day was celebrated at St. Andrew's Methodist Church in Grafton, West Virginia, on May 10, 1908.

Internationally there are a large variety of Mother's Day celebrations with different origins and traditions; but most have now also been influenced by this more recent American tradition.

History
First attempts to establish a holiday
During the 19th century, women's peace groups in the US tried to establish holidays and regular activities in favor of peace and against war. A common early activity was the meeting of groups of mothers whose sons had fought or died on opposite sides of the American Civil War.[3]

In 1868, Ann Jarvis, mother of Anna Jarvis, created a committee to establish a "Mother's Friendship Day", the purpose of which was "to reunite families that had been divided during the Civil War." Jarvis – who had previously organized "Mother's Day Work Clubs" to improve sanitation and health for both Union and Confederate encampments undergoing a typhoid outbreak – wanted to expand this into an annual memorial for mothers, but she died in 1905 before the celebration became popular.[4][5] Her daughter, who became almost obsessed with her, would continue her mother's efforts.

There were several limited observances in the 1870s and the 1880s but none achieved resonance beyond the local level.[4] At the time, Protestant schools in the United States already held many celebrations and observations such as Children's Day, Temperance Sunday, Roll Call Day, Decision Day, Missionary Day and others.[6] In New York City, Julia Ward Howe led a "Mother's Day for Peace" anti-war observance on June 2, 1872,[4][7][8] which was accompanied by a "Appeal to womanhood throughout the world" (nowadays known as Mother's Day Proclamation). The observance continued in Boston for about 10 years under Howe's personal sponsorship, then died out.[9] In these celebrations, mothers all around the world would work towards world peace.[7]

Several years later a Mother's Day observance on May 13, 1877 was held in Albion, Michigan over a dispute related to the temperance movement.[10] According to local legend, Albion pioneer Juliet Calhoun Blakeley stepped up to complete the sermon of the Rev. Myron Daughterty who was distraught because an anti-temperance group had forced his son and two other temperance advocates at gunpoint to spend the night in a saloon and become publicly drunk. From the pulpit Blakeley called on other mothers to join her. Blakeley's two sons, both traveling salesmen, were so moved that they vowed to return each year to pay tribute to her and embarked on a campaign to urge their business contacts to do likewise. At their urging, in the early 1880s, the Methodist Episcopal Church in Albion set aside the second Sunday in May to recognize the special contributions of mothers.[citation needed]

Frank E. Hering, alumnus and administrator at the University of Notre Dame and President of the Fraternal Order of Eagles, made a plea for "setting aside one day in the year as a nationwide memorial to the memories of Mothers and motherhood" in 1904.[11][12][13] After observing a class of Notre Dame students sending home penny postcards to their mothers, Hering went on to be a vocal advocate for a national Mother's Day for the next decade.[11] As Hering stated in a 1941 issue of Scholastic: “Throughout history the great men of the world have given their credit for their achievements to their mothers. [The] Holy Church recognizes this, as does Notre Dame especially, and Our Lady who watches over our great institution.”

Establishment of holiday
In its present form, Mother's Day was established by Anna Jarvis with the help of Philadelphia merchant John Wanamaker following the death of her mother, Ann Jarvis, on May 9, 1905. Jarvis never mentioned Howe or Mothering Sunday, and she never mentioned any connection to the Protestant school celebrations, always claiming that the creation of Mother's Day was hers alone.[14]

A small service was held on May 12, 1907 in the Andrew's Methodist Episcopal Church in Grafton, West Virginia, where Anna's mother had been teaching Sunday school.[4] The first "official" service was on May 10, 1908, in the same church, accompanied by a larger ceremony in the Wanamaker Auditorium in the Wanamaker's store in Philadelphia.[4] The next year the day was reported to be widely celebrated in New York.[15]

Jarvis then campaigned to establish Mother's Day first as a U.S. national holiday and then later as an international holiday.[16] The holiday was declared officially by the state of West Virginia in 1910, and the rest of the states followed quickly.[4]

On May 10, 1913, the U.S. House of Representatives passed a resolution calling on all federal government officials (from the president down) to wear a white carnation the following day in observance of Mother's Day.[17] On May 8, 1914, the U.S. Congress passed a law designating the second Sunday in May as Mother's Day and requesting a proclamation. The next day, President Woodrow Wilson issued a proclamation declaring the first national Mother's Day[18][19] as a day for American citizens to show the flag in honor of those mothers whose sons had died in war.[18] In 1934, U.S. President Franklin D. Roosevelt approved a stamp commemorating the holiday.[20]

In May 2008, the U.S. House of Representatives voted twice on a resolution commemorating Mother's Day,[21][22] the first one being passed without a dissenting vote (21 members not voting).[21] The Grafton church, where the first celebration was held, is now the International Mother's Day Shrine and is a National Historic Landmark.

Traditions
Traditions on Mother's Day include churchgoing, the distribution of carnations, and family dinners.[1] Mother’s Day is the third largest holiday in the US for sending cards. According to the greeting card industry, it is estimated that more than 50 percent of American households send greeting cards on this holiday.[24] The holiday has been heavily commercialized by advertisers and retailers, and has been criticized by some as a Hallmark Holiday.

Carnations
Carnations have come to represent Mother's Day since Anna Jarvis delivered 500 of them at the first celebration in 1908.[4][19][23] Many religious services held later adopted the custom of giving away carnations.[4] This also started the custom of wearing a carnation on Mother's Day.[12] The founder, Anna Jarvis, chose the carnation because it was the favorite flower of her mother.[27] In part due to the shortage of white carnations, and in part due to the efforts to expand the sales of more types of flowers in Mother's Day, florists invented the idea of wearing a pink carnation if your mother was living, or a white one if she was dead; this was tirelessly promoted until it made its way into the popular observations at churches.[12][28] Other less traditional flower options may include a live blooming plant, flower leis, or a bouquet of a variety of different flowers.

Commercialization
The commercialization of the American holiday began very early, and only nine years after the first official Mother's Day it had become so rampant that Anna Jarvis herself became a major opponent of what the holiday had become,[32][33] spending all her inheritance and the rest of her life fighting what she saw as an abuse of the celebration.[32] She decried the practice of purchasing greeting cards, which she saw as a sign of being too lazy to write a personal letter. She was arrested in 1948 for disturbing the peace while protesting against the commercialization of Mother's Day, and she finally said that she "...wished she would have never started the day because it became so out of control ..."[33] She died later that year.

Mother's Day is now one of the most commercially successful American occasions, having become the most popular day of the year to dine out at a restaurant in the United States[34] and generating a significant portion of the U.S. jewelry industry's annual revenue, from custom gifts like mother's rings.[35] Americans spend approximately $2.6 billion on flowers, $1.53 billion on pampering gifts—like spa treatments—and another $68 million on greeting cards.[36]

Commercialization has ensured that the holiday has continued, while other holidays from the same time, such as Children's Day and Temperance Sunday,[37] are no longer celebrated.