Breaking News: Weather Conditions Across Much of the U.S. (Is Spring coming?)

A powerful frontal system is moving through the eastern half of the U.S. on Saturday bringing severe weather to the South. Meanwhile, another round of cold, wintry conditions are moving in behind the system.
There were over 80 reports of severe weather throughout the South on Friday, including four reported tornadoes. Over 11,000 customers were without power in parts of Louisiana, Arkansas and Texas, according to Shreveport ABC affiliate KTBS. And hail larger than the size of a baseball were reported in central Texas. 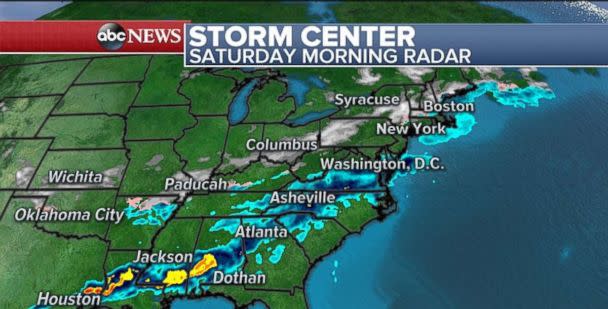 The storms have lost some intensity Saturday morning and are sliding to the south and east. Gusty winds and heavy rain are being reported across southern Louisiana, Alabama and Mississippi this morning. Behind the severe weather, on the cooler side of the front, some light snow and wintry mix is being reported across Kansas, Oklahoma, Missouri and Kentucky.
Winter weather advisories have been issued for parts of the Central Plains and Ohio Valley on Saturday morning. Some light snow and wintry mix has developed behind the frontal system. All accumulations should be light, but a few spots could be slick during the morning hours.
The frontal system slides to the east on Saturday, with more storms and heavy rain for parts of the Southeast. The best chance for severe storms from Florida to North Carolina come later today. 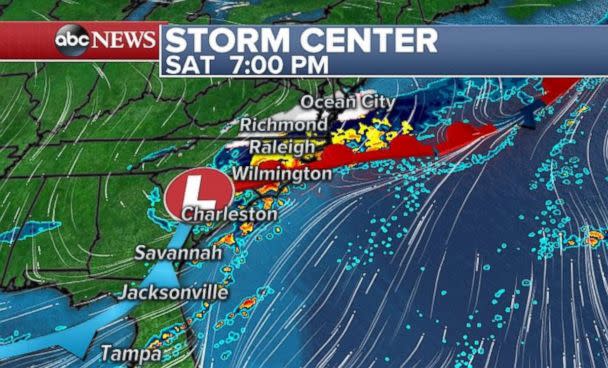 Therefore, there is a slight risk for severe weather Saturday in the southeast form Tallahassee, Florida, to Wilmington, Delaware. More damaging winds, large hail and brief tornadoes will be possible. The threat of severe weather will be lower on Saturday compared to Friday.
The frontal system pulls away late Saturday and early Sunday and heads out to sea. As the system pulls away, there is a chance some precipitation transitions to snow on Saturday night in parts of the Mid-Atlantic -- but the precipitation quickly moves out to sea and accumulations should be minimal.

Another blast of cold

Behind the frontal system is another punch of very cold air by April's standards. Wind chills will be more typical of February. It is feeling like the teens all the way down into Oklahoma on Saturday, and it feels like single-digits for a large part of the U.S. Even parts of the Midwest and Ohio Valley are feeling like the teens and 20s. Some daily record lows will be possible Saturday morning in the north-central U.S. 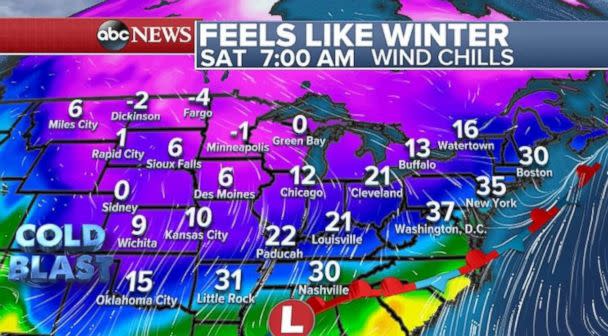 Wind chills could dip below freezing near the Gulf Coast on Sunday. In the Northeast, wind chills will be in the low to mid 20s. 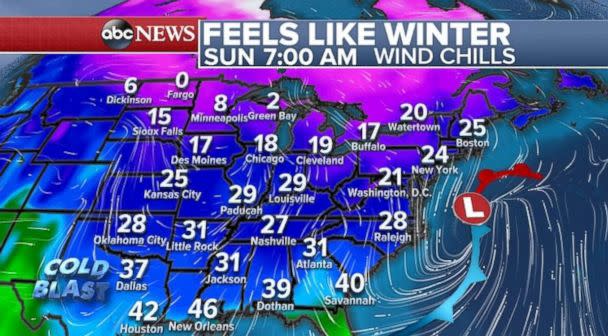 A strong storm is moving into the western U.S. on Saturday and bringing very heavy rain to much of the West Coast. San Francisco has already received 2.19 inches of rain since Thursday. The city also had one of its two wettest April days on record on Friday with 2.05 inches of rain. The city's usual April rainfall is 1.46 inches, meaning it received more than an entire month's worth in one day.
Rainfall rates Saturday morning are expected to be nearly 1 inch per hour. The heavy rain could cause debris flows and mudslides. Very heavy rain will also impact Oregon and Washington. Gusty winds will move in to Southern California and Nevada, where 45 mph gusts are possible locally through much of the Southwest. 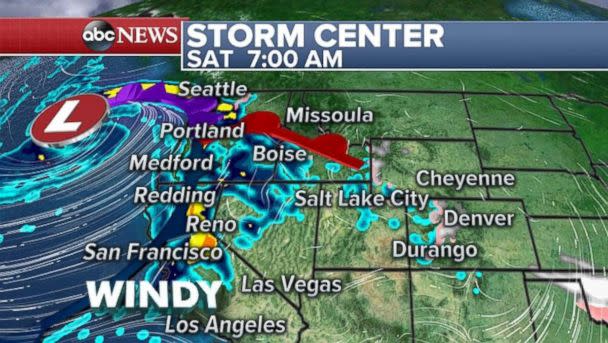 The storm's impacts move into the mountains on Sunday with plenty of rain and some mountain snow. Mild temperatures and rain could cause flooding issues in the northern Rockies of Idaho through the weekend.
The heaviest of the rain is expected to fall from Portland to Seattle with locally over 4 inches of rain still to come. 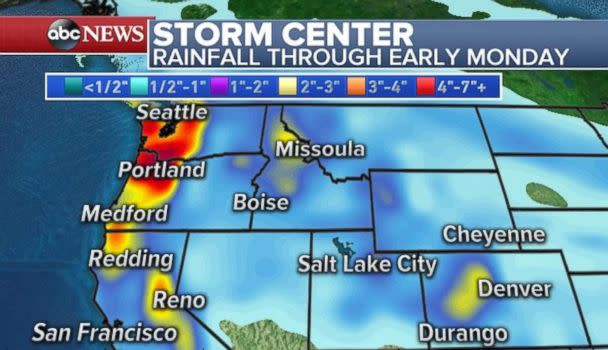 Email ThisBlogThis!Share to TwitterShare to FacebookShare to Pinterest
Labels: Across the U.S., raidercountry.net, Severe Weather