Daylight Saving Time 2018: When do we spring clocks forward? And why? 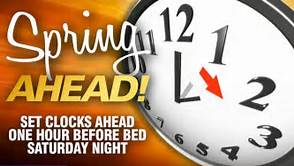 Spring is almost upon us, meaning longer days and more sunlight. It also means the start of Daylight Saving Time — when nearly all of the U.S. will collectively set their clocks ahead an hour, causing us to lose an hour of sleep.
Daylight Saving Time — sometimes incorrectly called daylight savings time and often referred to as "spring forward" — begins on Sunday, March 11, 2018, at 2 a.m. — when people should set their clocks ahead an hour to 3 a.m.
Though your cellphones and smart devices should change automatically, don’t forget to turn those manual bedside alarm clocks forward, or you could risk oversleeping and being late the next day.

How does Daylight Saving Time work?
DST occurs twice a year, beginning on the second Sunday of March and ending on the first Sunday of November, when we set our clocks back an hour, allowing us to get that precious hour of sleep back.

Who came up with Daylight Saving Time?
The modern idea of Daylight Saving Time was first proposed in 1895 by George Hudson, a New Zealand entomologist (the study of insects) and astronomer.
Some credit William Willett, an English architect, for first proposing the idea in 1907. However, it was Hudson who came up with the idea nearly a decade earlier after becoming annoyed with the little amount of daylight during the summertime, which was interfering with his study of bugs.
He believed that there must be a way to make better use of the day’s light by shifting the clocks by two hours in the summer and then two hours back in the winter.
However, when Hudson presented the idea to the Wellington Philosophical Society, he was ridiculed by many society members. Willett was also disregarded when he proposed a similar idea to Parliament in 1907.

Didn't Benjamin Franklin come up with DST?
Sort of, but not in the way we know today. Franklin is credited with coming up with the notion of making better use of the day’s light.
While visiting Paris in 1784, Franklin came to believe that sunlight was being wasted during the day. So, in a fanciful, tongue-and-cheek letter to the editors of a Paris newspaper, Franklin proposed a tax on all Parisians whose windows were closed after sunrise.
He believed that this would "encourage the economy of using sunshine instead of candles," according to Michael Downing, author of Spring Forward: The Annual Madness of Daylight Saving Time.

Who came up with modern DST?
Good question — war. During World War I, the German Empire hatched an idea that most resembles the DST that we observe today. Believing that it would conserve fuel during the war, the German Empire in 1916 became the first to switch its clocks to save daylight.

How did the U.S. come to adopt the practice?
Also World War I. In 1918, two years after the German Empire implemented its version of DST, the U.S. enacted a Daylight Saving Time law as a way to also conserve fuel.

Wasn't DST was created for farmers?
No, but you’re not alone in thinking that. A common misconception is that DST was implemented as a way to improve farming practices. However, this is a myth. In fact, during the early adoption of the practice in the U.S., farmers were among the biggest opponents of DST, believing that it would disrupt their farming practices.

Who made the practice of DST official in the U.S.
In 1973, President Nixon signed into law the Emergency Daylight Saving Time Energy Conservation Act, which made DST permanent in the U.S. This helped reduce confusion throughout the country with some regions of the U.S. participating in the practice and some regions opting out.

Does DST actually conserve energy?
Not really. But that hasn’t stopped lawmakers from continuing the practice and even expanding it.
In 2005, Congress passed the Energy Policy Act, extending Daylight Saving Time by a month. Backers of the bill believed extending DST would conserve even more energy throughout the U.S.
However, a study three years later by the U.S. Department of Energy revealed that the extended daylight throughout the year of 2005 saved a mere .5 percent in electricity use per day and only about .3 percent over the entire year.

What did Americans think of DST in the beginning?
Simply put, a large majority of Americans hated it and mocked it relentlessly.

Could DST have nothing to do with saving daylight and energy?
In his book, Downing said the biggest backer of passing a DST law in the early 20th century was the U.S. Chamber of Commerce, which believed that people would participate in more recreation and therefore be more likely to go shopping at stores and spend more money with additional daylight.

How many countries observe DST?
There are 78 countries that observe DST, many in Europe. Russia, China, India and Japan do not participate in the practice.