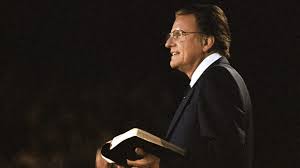 Born in 1918 in Charlotte, North Carolina, William Franklin Graham Jr. was the oldest of the four children of William and Morrow Graham. He was raised on a dairy farm, and little in his childhood suggested he would become a world-renowned preacher.

Then at 16, Graham attended a series of revival meetings run by outspoken evangelist Mordecai Ham. The two months he spent listening to Ham’s sermons on sin sparked a spiritual awakening in Graham and prompted him to enroll at Bob Jones College. When the conservative Christian school’s strict doctrine didn’t align with his personal beliefs, he transferred to the Florida Bible Institute (now Trinity College of Florida) and joined a Southern Baptist Convention church. He was ordained in 1939.

Graham received additional training at Illinois’ Wheaton College, where he met his future wife, Ruth McCue Bell. They were married for 64 years, until her death in 2007, and had five children.

After serving briefly as the pastor of the First Baptist Church in Western Springs, Illinois, Graham launched his first radio program, “Songs in the Night,” in 1943. Although he left a year later, Graham liked the idea of sharing his message with a wide audience. As noted on his website, Graham took Jesus Christ literally when he said in Mark 16:15: “Go ye into all the world and preach the Gospel to every creature.”

Graham was still in his early 30s when entered the public spotlight by giving a series of well-attended “sin-smashing” revival meetings that were held under a circus tent in a Los Angeles parking lot. The press took interest in the charismatic young preacher and began writing articles about him. To get his message to even more people, Graham founded his own ministry, the Billy Graham Evangelistic Association.

Graham viewed the Bible as the infallible word of God. He believed that Jesus led a sinless life and that all men were lost and would face God’s judgment. Most importantly, he was convinced he must use “every modern means of communication available” to spread the Gospel throughout the world, and did so in print, on radio and television, online and in person.

Graham’s sermons promoted evangelism and railed against “godless communism,” drugs, sex and violence. And for the next five decades, his electric personality connected with audiences in more than 185 countries.

Graham was the first evangelist of note to speak behind the Iron Curtain, and during the Apartheid era he refused to visit South Africa until the government allowed integrated seating at his events. He published dozens of best-selling books, including Angels: God’s Secret Agents and The Jesus Generation, and wrote a weekly column that was syndicated in hundreds of newspapers.

Graham received numerous honors, including the Horatio Alger Award, the George Washington Honor Medal, the Ronald Reagan Freedom Award and the Congressional Gold Medal. A highway in Charlotte bears his name, as does part of Interstate 240 near his home in Asheville, North Carolina. In 1989, he became the first clergyman to be granted a star on the Hollywood Walk of Fame for his work as a minister.

Graham also had a major effect on the civil rights movement of the 1950s and ’60s. His early crusades were segregated, but once the U.S. Supreme Court issued its landmark Brown v. Board of Education ruling in 1954, which found public school segregation unconstitutional, Graham integrated the seatings at his revival meetings.

Graham befriended the Rev. Martin Luther King Jr. as well, and together they preached to more than 2 million people in New York City. When questioned about his views on faith and race, Graham argued there was no scriptural basis for segregation.

As his message spread, Graham was granted personal audiences with royalty, dignitaries and many sitting presidents, from Harry S. Truman to Barack Obama. Three presidents were even on hand in 2007 for the dedication of the Billy Graham Library in Charlotte. Despite being a registered Democrat, Graham opposed the candidacy of John F. Kennedy, and actively encouraged other religious leaders to speak out about the dangers of having a Roman Catholic in the White House.

Though beloved by millions, Graham was not without his detractors. Some fundamentalist Christians took issue with his ecumenical approach to evangelism, and after his 1957 crusade in New York, opponents of Graham’s more liberal theology began calling him “the Antichrist.” According to the biography Billy: A Personal Look at Bill Graham, the World’s Best-Loved Evangelist by Sherwood Eliot Wirt, one Christian educator even said that Graham was “the worst thing to happen to the Christian church in two thousand years.” More recently, detractors blasted Graham’s continued belief that homosexual behavior was a “sinister form of perversion,” and his intolerance against the very presence of gay and lesbian couples within Christianity.

As his health began to fail, Graham decided to announce his retirement in 2005. His final sermon, “The Cross ― Billy Graham’s Message To America,” called for a national spiritual awakening.