Gold Is Telling Us Inflation Is Finally Coming

Stocks have now opened the year up 6%. Global interest rates are on the move, with the U.S. 2-year Treasury trading above 2% for the first time since 2008. Oil is trading in the mid $60s. And base metals are trading toward the highest levels of the young, two-year bull market in commodities. This all looks like a market that’s beginning to confirm a real, sustainable economic recovery – anticipating much better growth than what we’ve experienced over the past decade. If that’s the case, we should expect a big adjustment coming in inflation readings. And with that, we should expect a big adjustment coming for global interest rates. We’ll likely have a 10-year yield with a “3”  in front of it before long. And that will have a meaningful impact on key consumer borrowing rates (especially mortgages). On the inflation note, we’ve talked this week about the impact of higher oil prices on inflation and the impact it may have on the path of central bank policies (most importantly, the speed at which QE may be coming to an end in Europe and Japan).

You can see in this chart, the very tight relationship of oil prices and inflation expectations. 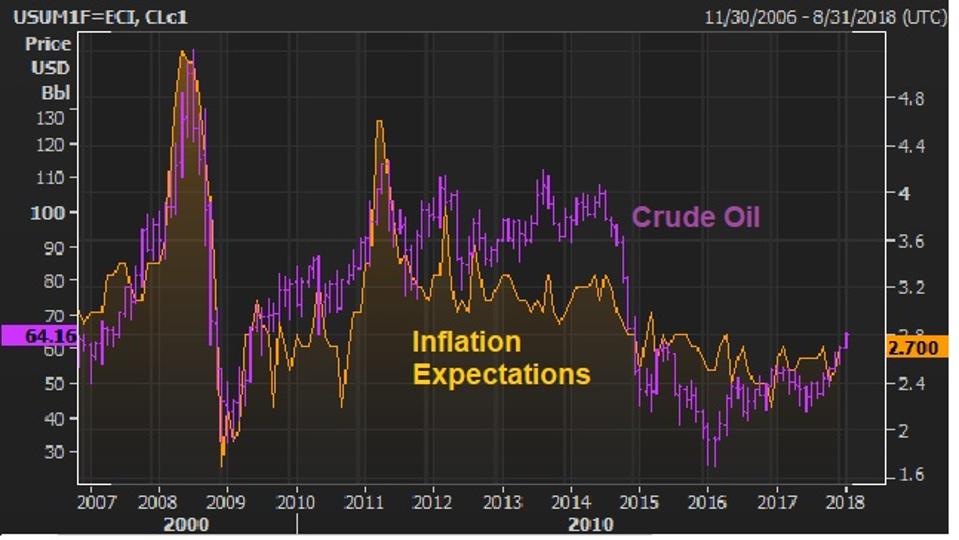 Now remember, one of the best research-driven commodities investors (Leigh Goehring) thinks we may see triple-digit oil prices — this year! This has been a very contrarian viewpoint, but beginning to look more and more likely.  He predicted a surge in global oil demand (which has happened) and a draw down on supplies (which has been happening at “the fastest rate ever experienced”).  He says, with the OPEC production cuts (from November 2016), we’re “traveling down the same road” as 2006, which drove oil prices to $147 barrel by 2008.
Bottom line, this is an inflationary tale.  If we had to search for a market that might be telling us this story (i.e. inflation is finally leaving the station), the first place people might look is the price of gold. What has gold been doing?  It has been on a tear.  Gold is up 8% over the past month.
Posted by Unknown at 02:25