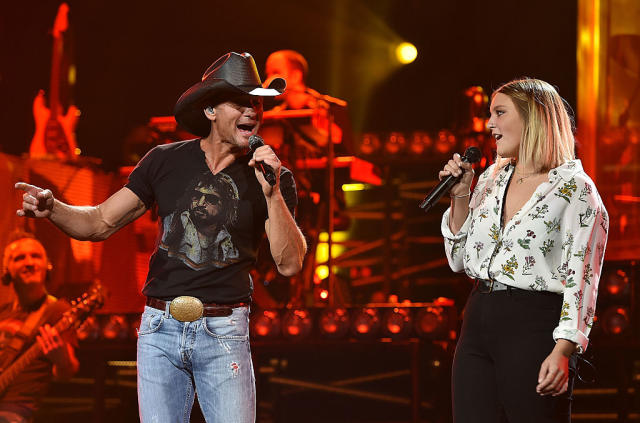 Being a country superstar means you’re often on the road, so Tim McGraw occasionally misses out on some big “firsts” with his family … like when his daughter went out on her first date.

McGraw and Faith Hill, both 50, are parents to three girls, Gracie, 20, Maggie, 19, and Audrey, 15, and their oldest marked this major milestone while her father was out on tour.

“I was on the road working, and they gave me a call and they said, ‘You know, Gracie’s going out on a date. Do you mind if she goes before you meet the guy?'” McGraw recalled on NBC’s The Tonight Show. “Faith said, ‘I’ve met him. He’s a really nice guy. We’ve done all our research. Everybody says he’s a really nice guy. We put our Secret Service guys on it, they checked him out, everything’s good.’ I said, ‘OK, they can go out tonight, but I’ll be home tomorrow. So around noon, I want him to come by the house just so I can say hi to him, look him in the eye, and shake his hand.”

McGraw got home around 2 a.m. and had to get up early the next day to get ready to host a barbecue at the house.

“We’re doing a barbecue, so I’m in the kitchen, and I forget that he’s coming. I have a white apron on and a knife and I’m trimming meat up, so I’ve got chunks of meat all over this white apron, blood everywhere,” he explained. “The doorbell rings, and I go and answer the door, and there’s this kid who’s dating Gracie standing there. I’ve got a knife in my hand and a bloody apron on, and it worked out really well!”

Well, that’s one way to make a first impression! Funny enough, McGraw previously confessed to meeting one of his daughter’s dates with a sledgehammer.

“There was a winter formal or something — it was a bunch of kids in a limousine — and I had a sledgehammer over my shoulder. But that was on purpose,” McGraw said on The Ellen DeGeneres Show earlier this year. “Look, you don’t want to be mean, but when someone’s taking your daughter somewhere, you want to induce a healthy amount of respect and fear.”

Hill thought the measure was a bit too extreme at first, but quickly got behind it.

“I was a little soft on it, but then when you go through it for the first time — those of you who have daughters out there — all of a sudden I became this animal, like, do it, take the sledgehammer,” she quipped. “Whatever you have to do, do it.”

To any guys hoping to date the McGraw girls, it’s safe to say that you’ve been warned.