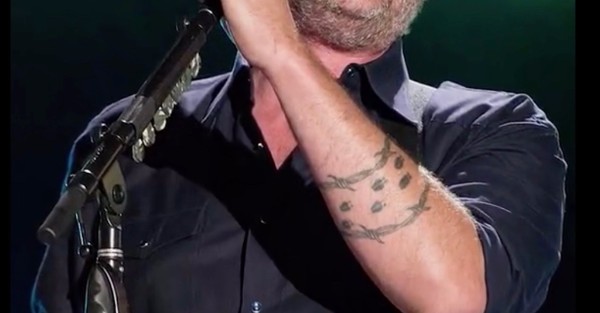 There are many valid reasons why Blake Shelton earned People magazine’s 2017 “Sexiest Man Alive” title. Not only is he tall, dark and handsome, but he’s also got that cute dimple on his cheek.
Turns out that his sexy charm has even rubbed off on some of his country cohorts, including the legendary Reba McEntire.

“He is pretty sexy,” Reba confessed, while speaking to “Southern Living” magazine. She then added, “I love Blake. He’s a sweetheart. Yea. I’d vote for [him.]”

Although Reba — a fellow Okie — admitted that she finds Blake pleasing to the eye, that didn’t stop her from poking fun at the tattoo on his forearm — you know, the one wrapped in barbed wire?
“He’s got that weird tattoo of ladybugs on his arm,” she said of his questionable ink. “He hates it when I say that, because it’s supposed to be deer tracks, but it looks like ladybugs.

“He put the barbed wire on it to make it look tougher. It didn’t help,” she continued. “It’s ladybugs. Blake, you know its ladybugs.”
Lucky for Blake, he won’t be judged specifically by his appearance in this year’s Rare Country Awards, as he’s up for Fan Moment of the Year, Male Artist of the Year and Grand Ole Opry Moment of the Year. As for Reba, she, too, earned a nomination for Grand Ole Opry Moment of the Year. It’s up to you to decide the winners. Vote now through Dec. 13 at RareCountryAwards.com. Winners will be revealed during a livestreamed concert event on Dec. 14 in Nashville. Voting gives you a chance to enter to win a trip to be there in person!