Owner of the Dallas Cowboys Sites NFL Rule on Protesters - We the American Public & Veterans Salute You Jerry Jones! 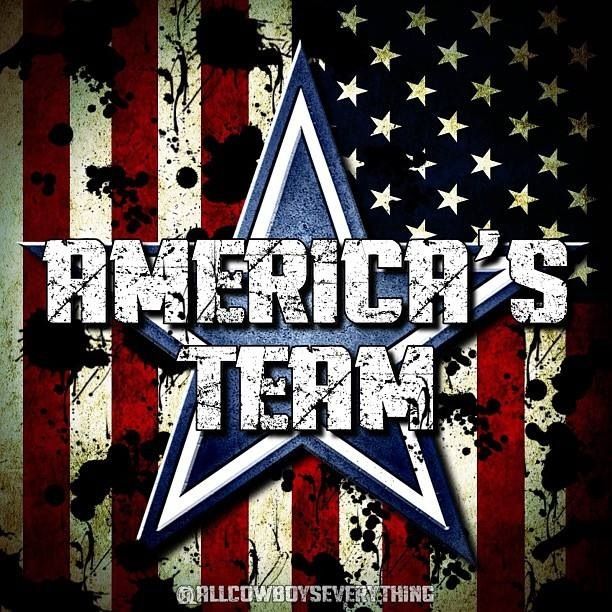 Controversy over protests during the national anthem simmered down in Week 4 after a leaguewide spread following President Trump’s September criticism. But the political brushfire flared right back up again in Week 5 thanks to Vice President Mike Pence’s highly publicized walkout from an Indianapolis Colts game, a protest of the protests apparently orchestrated by President Trump himself. Later in the day, following a last-second loss at the hands of the Green Bay Packers, Dallas Cowboys owner Jerry Jones spoke at length on the protests.
“I know this. We cannot in the NFL, in any way, give the implication that we tolerate disrespecting the flag,” Jones told reporters after the game. “We cannot do that. I know the vice president did leave because in his opinion, the teams were. We know that there is a serious debate in this country about those issues. But there is no question in my mind that the National Football League and the Dallas Cowboys are going to stand up for the flag. Just so we’re clear.”
Jones made it clear that he prized respect for the flag over team unity: “The main thing I want to do is make it real clear. There is no room here,” he said. “If it comes between looking non-supportive of our players and of each other or creating the impression that you’re disrespecting the flag, we will be non-supportive of each other. We will not disrespect the flag.” 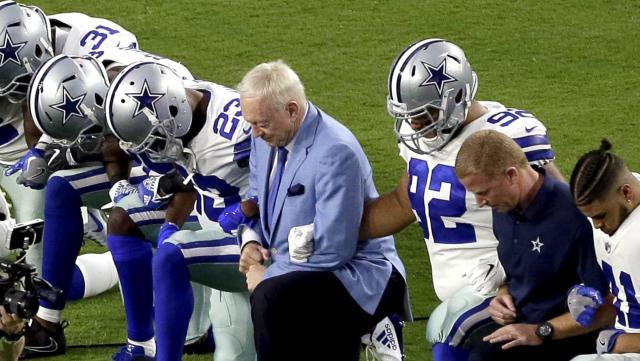 Jerry Jones said his players will stand for the anthem, or else. (AP)


Jones also cited the NFL’s own “rules that are on the book” as a justification for his line in the sand. The NFL’s Game Operations Manual, as quoted by the Washington Post, addresses anthem behavior in this fashion:
“The National Anthem must be played prior to every NFL game, and all players must be on the sideline for the National Anthem. During the National Anthem, players on the field and bench area should stand at attention, face the flag, hold helmets in their left hand and refrain from talking. The home team should ensure that the American flag is in good condition. It should be pointed out to players and coaches that we continue to be judged by the public in this area of respect for the flag and our country. Failure to be on the field by the start of the National Anthem may result in discipline, such as fines, suspensions, and/or the forfeiture of draft choice(s) for violations of the above, including first offenses.”
It’s worth noting that the only “must” in that paragraph pertains to the playing of the anthem itself; everything else is either a “should,” or a violation that “may” result in punishment. To date, the NFL has used that soft language to permit players to protest without immediate recrimination, with NFL spokesman Joe Lockhart saying “our players have a right to express themselves.” Jones is indicating that the Cowboys will follow a far more hardline philosophy.
“If there is anything disrespecting the flag, then we will not play. Period,” he said. “We’re going to respect the flag and I’m going to create the perception of it.”
Of course, one person’s disrespect of the flag is another’s peaceful, non-confrontational speech. One wonders how Jones might enforce that “respect” off the field — will fans in attendance be required to stand with hands over hearts? Will the Cowboys avoid wearing flag patches on their uniforms, or ditch the use of the giant horizontally-held flags so common across the NFL, all of which are in direct contradiction to U.S. government flag policy?
These are pedantic questions, of course, and you could argue that fans are “exempt” from Jones’ directive because he’s not paying them. But if you’re going to allow some forms of “disrespect” in your workplace and not others, well, you’re just opening yourself up for exactly the kind of ugly legal challenge the NFL tries to evade at every turn. (Also, once more, so we’re clear: Players do have a First Amendment right to say what they wish without fear of government intervention. The First Amendment doesn’t necessarily protect them from being fired by their employer, however.)
The NFL Players’ Association released a statement initially in response to Pence, but NFLPA officials noted that it had many applications on the day:
“NFL players are union members and part of the labor movement that has woven the fabric of America for generations. Our men and their families are also conscientious Americans who continue to be forces for good through our communities and some have decided to use their platform to peacefully raise awareness to issues that deserve attention.
“It is a source of enormous pride that some of the best conversations about these issues have taken place in our locker rooms in a respectful, civil and thoughtful way that should serve as a model for how all of us can communicate with each other.
“We should not stifle these discussions and cannot allow our rights to become subservient to the very opinions our Constitution protects. That is what makes us the land of the free and home of the brave.”
Regardless, the protest issue isn’t going away, and this week, at least, it’s politicians and owners, not players, who have created headlines.
Posted by Unknown at 00:55