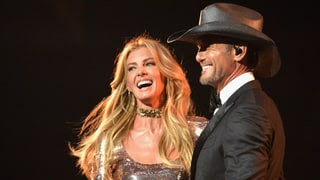 Tim McGraw and Faith Hill will honor years of fan requests when they combine talents for their first-ever duets album The Rest of Our Life, due to be released on November 17th. The married performers made the announcement today, along with sharing the slow-burning title track.

Written by pop star Ed Sheeran with Amy Wadge, Johnny McDaid and Steve Mac, "The Rest of Our Life" calls to mind the rhythmic R&B-pop of Boyz II Men's "End of the Road," at least in terms of sound. But the singular use of "Life" in the title is woven into the lyrics – it depicts a merging of two lives, wrestling with pledges of fidelity and promises of stability between partners. McGraw describes a nervous proposal, Hill imagines someone picking out names for the kids, and the two of them try to let go of anything that doesn't matter. "I'll be fine if one gray hair shows, I'll be fine if my waistline goes," they sing during the chorus, which McGraw handles as a beautiful, soft solo near the end. The video was also released today and is available on Amazon Music.
With nine songs produced by longtime collaborator Byron Gallimore and two more by Dann Huff, The Rest of Our Lives also features the lead single "Speak to a Girl" and "Damn Good at Holding On," the latter of which was co-written by "Humble & Kind" composer Lori McKenna. Pop singer-songwriter Meghan Trainor also provided her talents for the album-closing "Roll the Dice," co-authored with Shy Carter, Bobby Hammrick and James LeBlanc.
This weekend, McGraw and Hill's Soul2Soul Tour heads to Texas, with shows in Houston and Dallas, featuring support by Chris Janson.