“It’s important that those affected by these devastating storms know that, even if the path to recovery feels like a road that goes on forever, we’re with them for the long haul," said George Bush Sr.
All five living former presidents -- Barack Obama, George W. Bush, Bill Clinton, George H.W. Bush and Jimmy Carter -- will come together at a hurricane relief concert called “Deep From the Heart: The One America Appeal” on Oct. 21.
This announcement follows the former presidents’ joint effort to raise money for relief through the One America Appeal, launched last month. All proceeds will go toward the effort.
In a public service announcement featuring all five former presidents, Clinton says, “Hurricane Harvey brought terrible destruction -- but it also brought out the best in humanity.”

The star-studded event will feature appearances from country musicians Alabama, The Gatlin Brothers and Lyle Lovett as well as gospel singer Yolanda Adams and The Voice season three winner Cassadee Pope.
“The 43rd President [Bush Jr.] and I, and our distinguished colleagues in this ‘One America Appeal,’ are very grateful to these wonderful performers -- some of them old friends, some of them new -- for giving their time and talent to help the urgent cause of hurricane recovery in Texas, Florida and the Caribbean,” said Bush Sr. “It’s important that those affected by these devastating storms know that, even if the path to recovery feels like a road that goes on forever, we’re with them for the long haul.”
Lovett previously joined fellow musicians Bonnie Raitt, Willie Nelson and Paul Simon at the Texas Strong: Harvey Can’t Mess With Texas benefit concert last month.
See the announcement below, as shared by TIME White House coorespondent Zeke Miller: 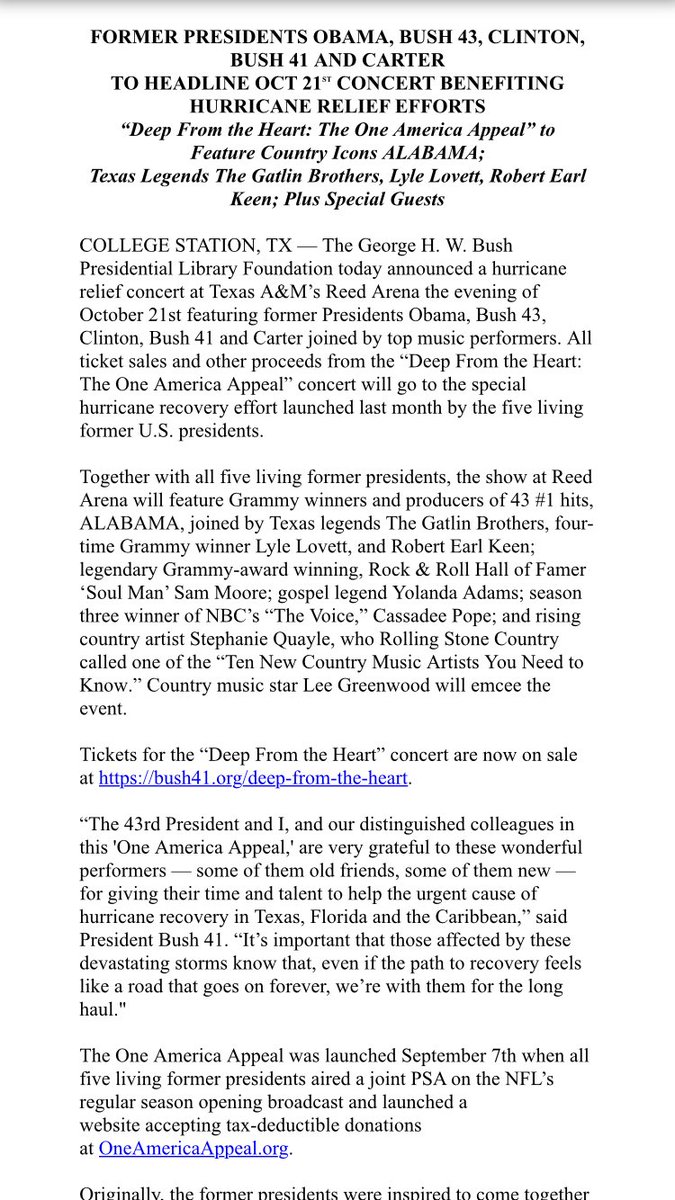