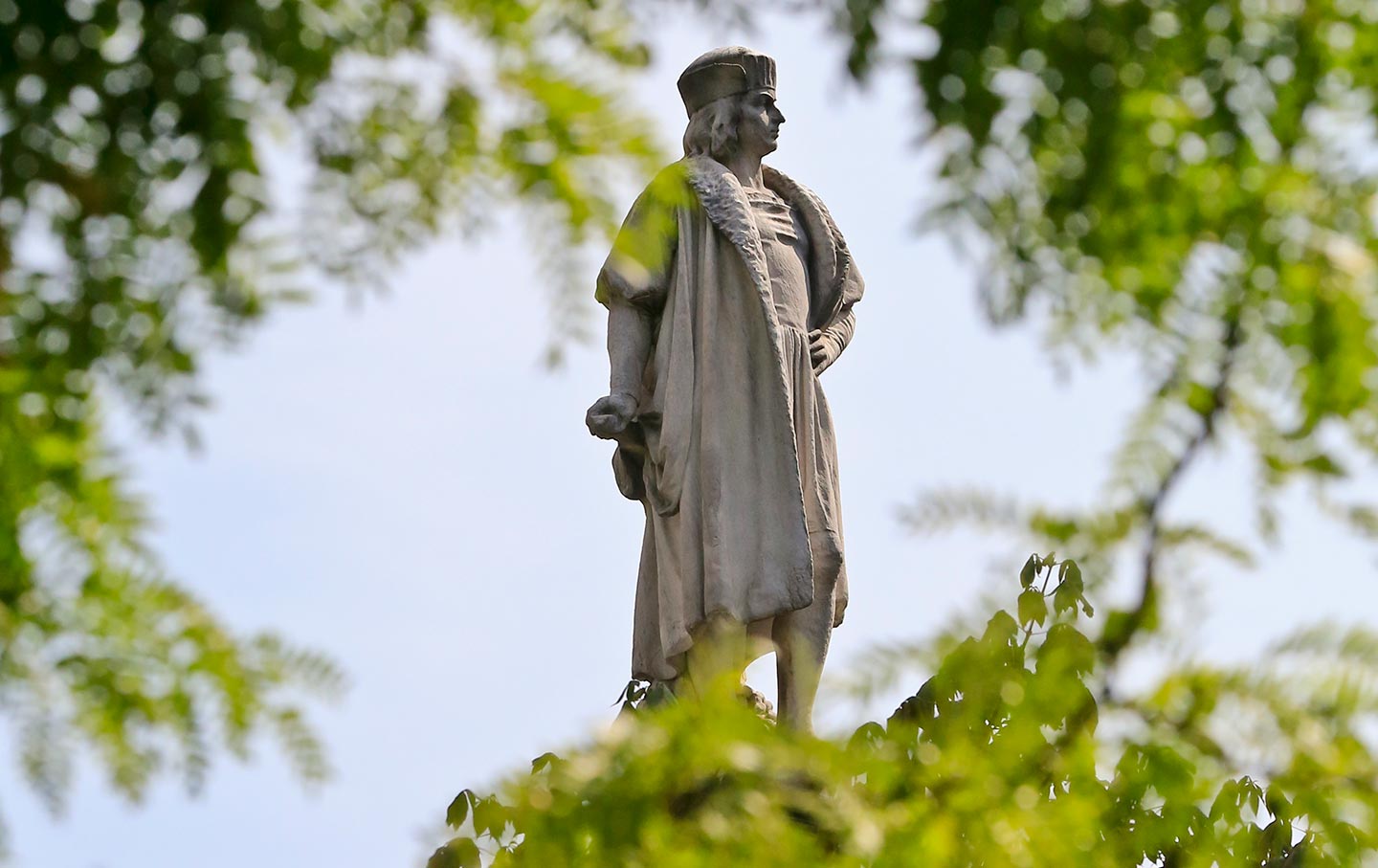 In 1892 The Youth’s Companion—a national magazine for kids edited by Francis Bellamy (the socialist minister better known for writing the Pledge of Allegiance)—offered its readers a program to celebrate the 400th anniversary of Christopher Columbus’s arrival in the New World. Every school in the nation, the magazine solemnly intoned, was to follow it to the letter.
Students and war veterans were to gather around the school flagpole at 9:30 am and begin by reading President Benjamin Harrison’s ode to Columbus, followed by the flag raising, the singing of “My Country ’Tis of Thee,” a Bible reading chosen by local religious dignitaries, and finally performing an original Columbus Day song commissioned for the occasion.
Columbus’s quadricentennial was 100 years in the making, and it would take nearly another century for a more critical and historically accurate picture of Columbus to creep into the American consciousness.
The American Revolution created the Columbus most of us over the age of 30 learned in grade school. Prior to the late 18th century, he was a historical footnote with no connection to the 13 colonies. An Italian, he sailed under a Spanish flag and landed in no part of the modern-day United States. Yet when the need to develop a national history with no discernible connection to Britain arose during the Revolution, early Americans seized upon him. He was a blank slate on whom post-Revolution Americans could project the virtues they wanted to see in their new nation. Then, as now, the process of writing Columbus was one of defining what it means to be American.


In 1775 Phillis Wheatley, a 14-year-old free African-American girl, wrote a poem to George Washington that so moved the general that he distributed it widely. In it “Columbia” was used as an allegorical representation of the American nation, no doubt a riff on the female figure of Britannia. Though written examples of “Columbia” as old as 1761 exist, young Wheatley’s correspondence with the most popular man in the colonies made it, in today’s parlance, go viral.
Soon Columbia and Columbus were appearing in songs, poems, and essays in newspapers around the colonies. Historian Claudia Bushman cataloged nearly 100 of the surviving odes, most of which are awful. Columbus went from a minor figure in the history of European exploration to an American hero almost overnight.
Why? Even then, people knew that Europeans, including Vikings and Portuguese fishing fleets, had visited or sighted North America before Columbus. And other explorers of Columbus’s era have better claims to “discovery” of the land that we now call the United States. But the politics of the Revolution disqualified the other contenders. Henry Hudson was British. Giovanni Caboto (anglicized as “John Cabot”) sailed for Britain. Juan Ponce de Leon was already in use as a hero in Spain. Giovanni da Verrazzano met an end unbefitting any proper national hero, having been eaten by Carib Indians in 1526.

Columbus had flaws as well. Until his death, he publicly insisted that he had in fact landed in East Asia as he originally intended. He was neither an especially talented mariner nor a success at founding a colony in the New World. Other than to allow him to begin bouncing around the Caribbean doing capricious and cruel things to its inhabitants, his famous voyage accomplished little.
Yet almost nothing was known about Columbus in the American colonies at the dawn of the Revolution, and this worked in his favor. The few written records of his voyages, including a biography by his son Ferdinand and a 16th-century history by Bartolome de Las Casas, were unavailable in the New World and were not translated into English until much later. The only detailed history of Columbus and his voyages widely available in colonial libraries was written by a Scotsman, James Robertson, in 1777. The author took a racist, ethnocentric tone, depicting Columbus as an explorer of noble intent bringing civilization to the savages. Importantly, Robertson also historicized Columbus as a man stifled by the rigid ways of the Old World and yearning to set his own course. The metaphor was not subtle, and revolutionary America embraced it.
Columbus-mania swept the nation beginning with the war, because he became, with the help of Robertson’s history and the flood of epic poems and odes to him, a symbol for the go-it-alone, trailblazing spirit of the American people. Adopting “Columbia” as an informal name for the budding nation implied that, like Columbus, the colonies were shedding the yoke of the Old World. Historical accuracy was irrelevant.
Towns and streets beyond counting, including state capitals in South Carolina (1786) and Ohio (1812), were named for him. In 1784, King’s College in New York City restyled itself Columbia University. Many publications—Columbian Magazine (1786), Columbian Museum (1791), the Columbian Register, the Columbian Weekly Register—appropriated his name. The political organization that eventually became the powerful Tammany Hall political machine in New York was founded in 1786 as the Columbian Order. In 1791, the Territory (later District) of Columbia was established as the national capital. A year later, Robert Gray, sailing the Columbia, scouted the Pacific Northwest, christened the Columbia River, and named the entire region Columbia (which survives north of the border today as British Columbia). And in 1798, Joseph Hopkinson wrote the original national anthem, “Hail Columbia.”


If you like this article, please give today to help fund The Nation’s work.
Two events conspired to ensure that the American affection for Columbus was no passing fad. First, Americans turned the tricentenary of Columbus’s 1492 voyage into a massive celebration. Statues and monuments began appearing around the country. New York, Boston, and Philadelphia all held parades led by costumed actors portraying Columbia and Christopher Columbus. Who better to lead the nation’s first opportunity to celebrate a history that was not connected to Britain and had not happened within living memory?
Rather than fade, the mythologization of Columbus only intensified. Joel Barlow’s epic (and nearly unreadable) poem The Columbiad (1807), for example, was narrated by an angel. Judging by the popularity of the poem, few at the time thought attributing divine guidance to Columbus (read: America) was overwrought.
The second key turning point in weaving Columbus into the fabric of American identity was the publication in 1828 of Washington Irving’s The Life and Voyages of Christopher Columbus. This stunningly inaccurate book purported to be a history and codified the version of Columbus who “sailed the ocean blue in fourteen hundred ninety-two” taught to generations of American children. Exemplary of Irving’s mythmaking was the mangling of Columbus’s motivation for the voyage of 1492. The real Columbus studied Portuguese sailors’ maps, concluded that Southeast Asia lay just beyond the map edges, and set out to prove it. Irving’s Columbus sailed to prove that the world was round, thumbing his nose at European elites who insisted it was flat. Throughout the book, Columbus is valiant, intrepid, and eager to shed Old Europe—not coincidentally, exactly the qualities the United States saw in itself.
But even compared to the late 18th century, nothing can match the Columbus Fever achieved in 1892–93 as the country celebrated the 400th anniversary of his voyage with the Chicago World’s Fair, the “Columbian Exposition.” No monument was too grand, no speech too florid or obsequious, and no projection of the nation’s desire to assert itself too obvious for the America of 1893. Francis Bellamy’s program for schools was, if anything, restrained by the standards of that year.
Eventually, time chipped away at this hero Columbus. Irving’s fables of 1828 remained in history books, oral traditions, and school curricula throughout the 20th century. But the legend began to share space with a growing, if still insufficient, recognition of the atrocities that Columbus inflicted upon the population of the Americas during the so-called Age of Exploration. His landing in 1492 was downgraded (appropriately) from a “discovery” to the more prosaic “encounter” or “exchange,” as Americans slowly admitted that the word “discovery” is a poor description of a man landing on an island where other people already lived.
More importantly, as more Americans have grown (slightly) more comfortable with confronting the darker aspects of history, discussion of Columbus’s enslaving, summarily killing, and dispossessing the populations he encountered rose above a whisper for the first time during the much-subdued 500th anniversary in 1992. Historians and cultural critics persuasively asserted that glorification is unbefitting a man who wrote, “Let us in the name of the Holy Trinity go on sending all the slaves that can be sold,” as he rounded up 1,500 Arawak inhabitants of the Lesser Antilles to sell them in Spain. Bartolome de Las Casas, in his 1561 account based on accounts from Columbus’s crew, depicted Columbus as a man for whom casual killing was a leisure activity. Once again Columbus was a surrogate, this time for an America making a clumsy and overdue effort to grapple with a shameful part of history.
Colonial Americans adopted Columbus as a cultural icon because of the practical need to construct a national historical identity that excluded Britain. Celebrating Columbus, for much of American history, has been an exercise in projecting onto him the virtues we would like to see in ourselves and our country.
Today, in an America learning to accept the Columbus legend as a hagiography, using Columbus as a national metaphor feels dated and naive. Only willful ignorance of the historical record can preserve him today as the enlightened voyager who discovered and brought blessings upon an unknown land.
But the real Columbus—not the constructed myth—should resonate in contemporary America. Columbus set off to find Asia, landed in the Caribbean, and, until his death, insisted in the face of overwhelming evidence that it really was Asia. Rather than celebrate what he did achieve, admit that fortune had something to do with his success, or recognize the horrors he wrought, he unapologetically defended himself and blamed any suggestion of failure or incompetence on others. Americans of the 18th century rescued the then-obscure Columbus from the history of European imperial conquest for political reasons unique to that era. They could not have known how perfect a cautionary tale the real Columbus would be for the United States of 2017.