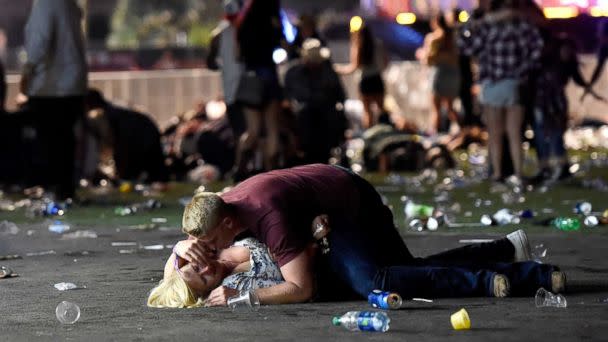 More than 50 people were killed and "well over" 400 were injured when a gunman opened fire on concertgoers from a perch above the Mandalay Bay Resort and Casino in Las Vegas Sunday night, police said, making it the deadliest shooting in modern U.S. history.
The "nonstop gunfire," according to one witness, sent more than 22,000 attendees of a country music festival across the street from the hotel ducking for cover and scrambling for their lives. Police say the suspect, who was found dead, had over 10 rifles. 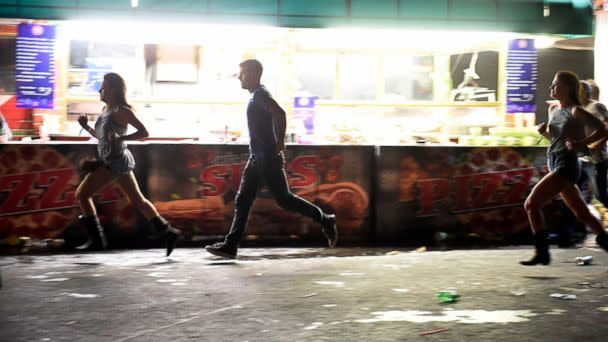 Bystanders sprang into action, caring for the wounded and at least one of them described a man's dying in his arms.
A Las Vegas police officer who was off-duty attending the concert is among the dead, police said.
One video showed the aftermath as the injured lay on stretchers or on the ground with responders and bystanders surrounding them to give aid. Bystanders made makeshift stretchers out of police barricades, plugged wounds with their hands and used their clothing to try to stanch the bleeding from the wounded.

In the wake of the shooting, the Las Vegas Police Department said authorities responded to a hotel room on the 32nd floor of the Mandalay Bay hotel, where police said the suspected gunman, 64-year-old Stephen Paddock, was dead. Police said they believe Paddock, of Mesquite, Nevada, killed himself prior to police entry.
The motive was unclear. A senior law enforcement official told ABC News that so far there are no ties to international terror.