Update: Hurricane Irma Advances Slowly Toward the U.S.A. - Where Will She Strike?

Irma may become Category 4 hurricane while tracking across Atlantic; Will it affect the US?

This animation shows Hurricane Irma spinning westward over the south-central Atlantic. The eye of the storm has been undergoing changes in recent hours and fluctuations in strength are likely this weekend. (NOAA/satellite)

While the Gulf Coast continues to deal with the devastating impacts of Harvey, emergency managers in the United States have another tropical threat to monitor by the name of Irma.
Far across the Atlantic, west of the Cabo Verde Islands, Irma strengthened into a Category 3 hurricane as of Thursday afternoon. Irma has since weakened to a Category 2 hurricane, but restrengthening is expected.
"There is the potential for Irma to ramp up to an even more powerful hurricane this weekend," according to AccuWeather Hurricane Expert Dan Kottlowski. 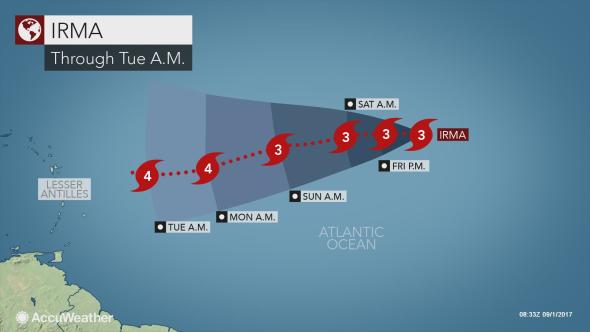 "While fluctuation in strength is likely, we expect Irma to become a Category 4 well before it reaches the Lesser Antilles," Kottlowski said.
A Category 4 hurricane has sustained winds of 130-156 mph (209-251 km/h).
Subtle changes in water temperatures and atmospheric conditions, such as slightly drier air and a small patch of strong winds aloft, can cause significant fluctuations in strength in even the strongest of hurricanes.
As of early Saturday morning, Irma was located about 1,320 miles (2,120 km) east of the Leeward Islands with maximum sustained winds of 110 mph (177 km/h).

Irma will take about a week to make its trek westward across the Atlantic Ocean. Meteorologists will likely be tracking this storm through the middle of September.
"All interests in the eastern Caribbean will need to monitor the progress of this evolving and dangerous hurricane," Kottlowski said.
"Surf will begin to build on the east-facing beaches in the Leeward and Windward islands late this weekend into early next week, according to AccuWeather Senior Meteorologist Alex Sosnowski.

How much seas, surf and winds increase during the first part of next week will depend on the exact track of Irma.
“Steering winds will guide Irma close to the Leeward Islands and then perhaps Puerto Rico and Hispaniola during the middle days of next week,” according to AccuWeather Meteorologist Brian Thompson. 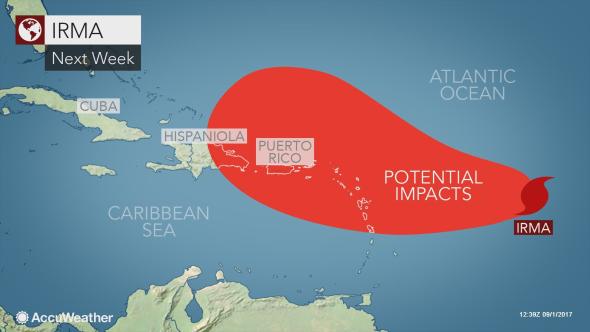 "While the hurricane is strong, it is relatively small in size at this time," Sosnowski said. "Should this small size continue, severe effects from the storm may be limited to a radius 50 miles (80 km) of the center, while the storm moves through the tropics."
Locally heavy showers and gusty thunderstorms may extend beyond 100 miles (160 km) from the eye. Torrential rain and flooding will be a concern, if and where the eye wall approaches the islands.
Beyond early next week, there is a wide range as to where Irma may go and the storm may grow in size.
Plenty of atmospheric factors highlighted by non-tropical systems will come into play to determine its path. These non-tropical systems will be moving around.

"At this early stage, it is unclear whether a non-tropical storm will draw Irma toward the U.S., push it away or miss affecting it entirely prior to the middle of the month.," Kottlowski said.
Possibilities range from a landfall from the northern Caribbean islands to Florida, the Carolinas or Bermuda. There is also a chance the system curves northward and avoids North America entirely or slides into the Gulf of Mexico.
"At some point next week, Irma will begin to take a more west-northwest path," Kottlowski said. "Whether Irma then continues to curve northwestward and then northward or remains on a steady west-northwest path is uncertain.
Posted by Unknown at 14:26