Hurricane Maria leaves all of Puerto Rico in the dark

All of Puerto Rico was without power by Wednesday afternoon, officials said, just hours after Hurricane Maria made landfall on the island as a Category 4 storm.
Puerto Rico Office of Emergency Management Agency confirmed that 100 percent of the U.S. territory has lost power, noting that anyone with electricity is using a generator.
Puerto Rico Gov. Ricardo Rossello said Maria has caused severe damage to infrastructure. A Category 4 storm has not hit the island since 1932.
Rossello told local newspaper El Nuevo Dia, which streamed the telephone interview live on Facebook, windows had shattered, rivers were overflowing and trees had fallen.
As of 2 p.m. ET, Maria had weakened to a Category 3 hurricane with maximum sustained winds down to 155 mph as the storm moved over Puerto Rico, according to the National Hurricane Center.
A weather station near Arecibo, some 43 miles from San Juan, reported a sustained wind of 71 mph and a wind gust of 91 mph on Wednesday morning.
"This is an extremely dangerous and life-threatening situation," the National Hurricane Center warned. 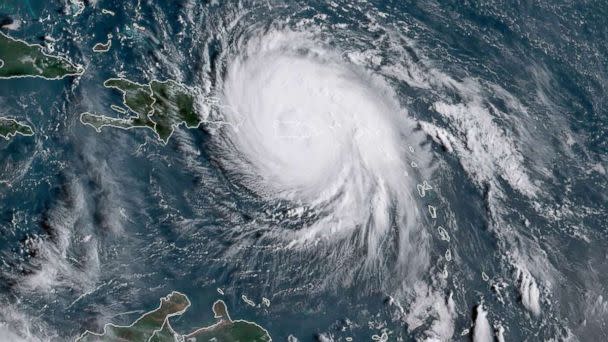 Hurricane Maria is 450 miles wide and hurricane-force winds extend up to 60 miles from its center.
Storm surge was predicted to be 6 to 9 feet in coastal Puerto Rico and the U.S. Virgin Islands. Rainfall totals for Puerto Rico were projected at 12 to 18 inches, with as much as 35 inches in isolated areas.
Felix Delgado Montalvo, the mayor of Catano, some 7 miles southwest of San Juan, told ABC News on Wednesday there are hundreds of people in shelters and over 1,000 homes were damaged or destroyed in the communities of Juana Matos, La Puntilla and Puente Blanco. Most of the homes are flooded and are missing roofs or have collapsed walls, he said.
About 80 percent of residences in the Juana Matos community were destroyed from storm surge and flooding. Homes there are filled with at least 3 to 4 feet of water, according to Montalvo. 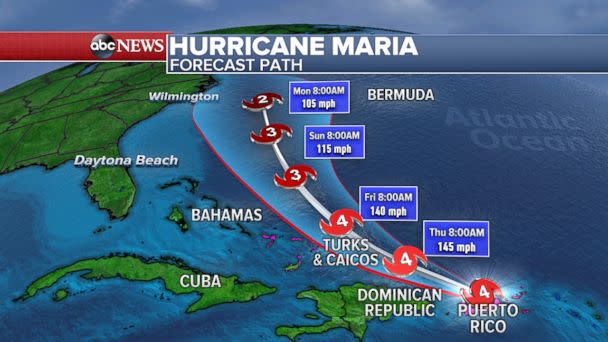 Puerto Rico will experience hurricane-force wind gusts through Wednesday afternoon, though the wind will weaken as the day goes on.
Maria is forecast to move off Puerto Rico's northern shores and into open Atlantic waters Wednesday night, potentially allowing the storm to strengthen, according to ABC News meteorologists.
Maria is also forecast to approach the Dominican Republic on Wednesday night, but the Caribbean nation is not expected to get directly hit. Still, Punta Cana could experience hurricane conditions. 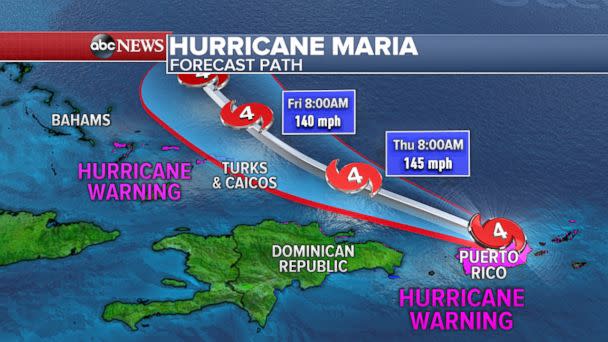 By Friday, Maria will pass to the east of Turks and Caicos, where there's a potential for hurricane-force winds and heavy rain but the storm is not expected to make a direct hit.
From there, the hurricane is forecast to pass by the southeast Bahamas Friday into Saturday.
"At this point, it looks like Maria will miss the United States and will move out to sea sometime later next week," ABC News senior meteorologist Max Golembo said. "But this will be a close call, so we will be watching carefully."
Forecast models currently show the storm continuing to weaken next week as it travels far offshore of Florida and the Carolinas.

Maria leaves behind trail of death, destruction in Caribbean

Maria did severe damage to multiple Caribbean islands over the past 36 hours, including Dominica, Guadeloupe and the Virgin Islands.
Hartley Henry, an adviser to Dominica's prime minister, told reporters via WhatsApp on Wednesday that several people have died and the death toll "will rise" as officials continue to assess the widespread damage on the tiny island. Dominica has suffered a "tremendous loss of housing and public buildings" since the storm hit, ripping off roofs and tearing doors from hinges. The island's main general hospital "took a beating" and "patient care has been compromised," he said.
"The country is in a daze -- no electricity, no running water," Henry said via a WhatsApp message. "In summary, the island has been devastated."
Officials in Guadeloupe announced Wednesday that two people were killed and two others were missing due to the storm.
France's Interior Minister Gerard Collomb said some 80,000 people in Guadeloupe -- around 40 percent of the population -- were without electricity Wednesday. Many roads there are impassible due to flooding and French Navy planes have not been able to assess the damage on the island due to bad weather conditions.
In Martinique, about 70,000 homes were without electricity and 50,000 homes did not have access to safe drinking water Wednesday. Fallen trees and downed power poles have blocked many roads there, Collomb said.
Police and soldiers have been deployed in both Martinique and Guadeloupe to ensure security. More than 3,000 first responders are on the French Caribbean islands, according to Collomb.
ABC News' Benjamin Gittleson, Joshua Hoyos and Paul Pradier contributed to this report.