When analyzing the nominations for the 51st CMA Awards, it's a tale of two Jasons 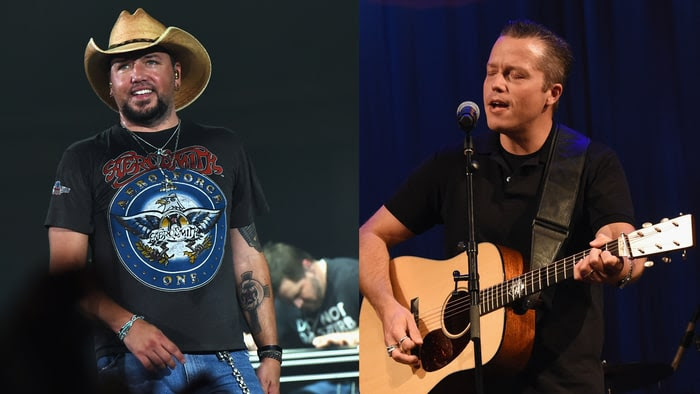 When the Country Music Association announced the nominees for the 51st CMA Awards on Monday, the biggest surprises involved two very different guys named Jason. Country chart-topping superstar Jason Aldean was shut out in all categories, while Americana outlier Jason Isbell scored an Album of the Year nomination for his LP The Nashville Sound.
The snubbing of Aldean is perplexing. During the eligibility period, he released They Don't Know, his best album since 2010's CMA Award-winning My Kinda Party. They Don't Know debuted at Number One atop both the all-genre Billboard 200 and Country Albums charts and, to date, has yielded three Number One singles. He also furthered his reputation as one of the genre's most consistent live draws with a yearlong tour. But most importantly, Aldean picked up his second consecutive Entertainer of the Year title at the ACM Awards, the competing country awards show by the California-based Academy of Country Music. Conversely, his last CMA Entertainer nomination was in 2013.
So what gives? Historically, the CMA Awards, held in Nashville, are a more traditional leaning show. They famously lauded Chris Stapleton and his classic outlaw-country sound in 2015, and crowned Garth Brooks Entertainer of the Year in 2016. Aldean, by comparison, is known for dragging the sound of the genre into the future, with bold sonic departures like "Dirt Road Anthem" and "Burnin' It Down." Still, he knows his way around a trad-country song. See 2009's "The Truth," one of the best country performances of the Aughts, as well as his latest Number One, the weepy "Any Ol' Barstool."
His status on an independent label may also affect his exposure. Aldean is signed to Broken Bow Records, which for now (BBR Music Group was recently acquired by BMG) lacks the bloc voting muscle of a corporation like Universal Music Group (Stapleton, Bryan and Urban are all under the UMG banner.)
But that same theory doesn't hold water for Isbell, a defiantly indie artist who releases his albums via his own Southeastern Records, with support from Thirty Tigers. His Album of the Year nomination is a true wildcard. He's the undeniable king of the Americana genre and his latest album, despite being titled The Nashville Sound, is far from anything resembling CMA "country." In fact, Isbell has been touting the record as his return to a harder rocking sound. Later this month, he'll compete for Artist of the Year at the Americana Honors & Awards.
Perhaps CMA voters were looking to broaden the scope of the organization by recognizing a universally lauded songwriter – or maybe they just saw "Nashville" in the album title. For his part, Isbell responded to the news with a tweet praising his fellow Album nominees Chris Stapleton, Miranda Lambert, Little Big Town and Lady Antebellum: "We're grateful for the CMA recognition. Happy to be included in a category with some real country artists."
But Isbell has never lobbied to be included in the CMA universe. This summer, he refrained from playing CMA Music Festival, tweeting, "Sorry guys I won't be playing any CMA fest gigs this week. The reason is because I did not want to do that." While we don't know if Isbell was invited to the big party, he made it clear he wasn't interested in showing up either way.

That clearly didn't rankle voters. Nor did Isbell's comments to Rolling Stone in July, in which he said of contemporary country, "most of that stuff is just real bad music to me."
It all makes one wonder if Isbell will even appear at the November 8th ceremonies.
Here's hoping that he does, and that he receives and accepts an invitation to perform on national TV. But should Aldean be asked to bring his starpower to the stage for the sake of TV ratings? He should graciously decline.