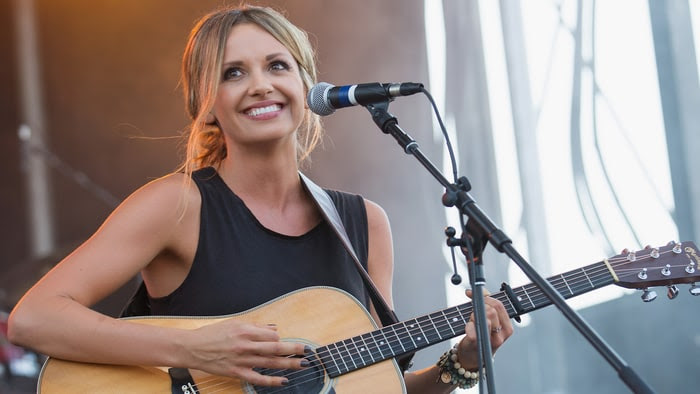 Sparsely produced ballad flies in the face of convention, but is resonating with both fans and country radio

Carly Pearce's ballad "Every Little Thing" has become a surprise hit
She'd been a wunderkind, fronting her first band by age 11 in her native Taylor Mill, Kentucky, and performing six shows a week at Dollywood in Pigeon Forge, Tennessee, at 16. After signing an artist development deal with Sony, her team's efforts to make her into the next bluegrass star failed before an album was ever cut. Interest waned, the market moved on and Pearce lost her record deal. She had to take whatever work she could get for the next few years: from mall jobs at Banana Republic to cleaning Airbnb properties.
Sometime later Pearce was scrubbing the kitchen sink at one of those rental properties, with the Pandora country station on in the background. Suddenly, she recognized the song playing: "Dance Hall" by The Voice fourth-season winner Danielle Bradbery. During Pearce's time with Sony, that was her song – the one she'd put on hold to launch her career. Now, she was listening to it help launch someone else's. This was when she finally cried.

"The cards were in [Bradbery's] favor at the time, and I was cleaning toilets," Pearce, 27, tells Rolling Stone Country during a rare moment at home in Nashville. "I've had moments of wanting to give up and quit and go home back to Kentucky, but I think there's still just this constant fire in me that I really do and did believe, through all of it, that I'm meant to do it."
Five years later, Pearce is definitely doing it. Her first single, "Every Little Thing," is currently heading toward the Top 10 on the Billboard Country Airplay chart and will anchor her October 13th debut album of the same name. But as talented as she may be – talk to anyone who knows her, and they'll all tell you about her great talent –Pearce has come this far because of her tenacity.
"Too many amazingly talented people give up, go home, get burned-out," says Emily Shackelton, who, along with producer Busbee, co-wrote the single "Every Little Thing" with Pearce. "Nashville really is about the ones that stick it out through those hard times. And that's just Carly's story to a T."
Pearce agrees with this assessment.

"I am a poster child for how you can get every single door slammed on you five times in a row from every single person in town, and you can be told that you're old news and you're past your time," she says.
Through the low times after losing her deal, Pearce was still writing, playing rounds and shopping her songs to artists and a record to labels. It was during this time that she met Pete Fisher, then the vice president and general manager of the Grand Ole Opry (he's now the CEO of the Academy of Country Music). Fisher, a former music publisher and artist manager, was impressed by Pearce's voice, but particularly by her drive. Over about a dozen meetings they had before her Opry debut in 2015, Fisher noted she was quick to take advice and follow through.
"She wasn't one to grab a cup of coffee and then nothing happened afterward," he says. "She very much approached her pursuit of a country-music career in a real professional manner."
Fisher started floating her name around, and in 2015 Busbee signed Pearce as his first artist to develop. She had the voice, but it was that drive that made the producer confident that she was worth the investment.

"I'd rather bet on someone I know will work that hard," he says. "To be able to find somebody whose only missing piece was the music, that's a no-brainer."
Despite his success, Busbee might be the least likely producer to partner with someone like Pearce. His background isn't solely within country, and at the point when the two met, he'd worked with such varied artists as the Backstreet Boys, Toni Braxton and the Fray. Pearce, with her traditionalist upbringing and a voice seemingly at home in Appalachia – "She could be on stage singing bluegrass with anybody," he says – was on the opposite side of the spectrum.
"Part of what we do is taking risks, and you're taking risks based on statistics. Statistics say do not bet on a female artist," says Busbee. "But I love soulful artists. Carly is soulful. Maren Morris is soulful. Lady A is soulful. Keith Urban is soulful."

Possibly the best example of Pearce's soul comes from the title track of Every Little Thing. The sparsely produced ballad seemingly flies in the face of convention – a woman in country music debuting a ballad about heartbreak checks nearly every box of what not to do. And yet it's working, despite the long odds.
"The thing that an artist needs, especially the first time, is that car-crash moment, that thing that's so impactful that people can't help but stop and listen to it," says Busbee. "It's not whether it's a ballad or it's not a ballad: It's about the fact that when you hear it, you kind of go, 'What is that?' and you can't stop listening."
That song's initial success, released independently and bolstered by support from SiriusXM's the Highway station in late 2016, has led to a whirlwind year: Pearce signed with Big Machine Label Group and the song has steadily ground its way up the Billboard Country Airplay chart, while Pearce herself has landed opening slots for Bobby Bones' comedy show and Brett Young's first headlining tour this fall. While she may not have had the smoothest journey to where she is now, Pearce's indomitable drive has allowed her to rewrite her own ending for a new and better one.
"I think that now I can look back and see all of the challenges and the struggles and the setbacks and the different ways of God showing me that this was going to be the path for me, but I needed to get a lot of grit," she says. "I feel so lucky that I didn't get it prematurely because I do think it wouldn't have been going the same way and I wouldn't be so proud of the music that I'm making.
"I hope that I can start to be a light to other female artists," she continues, "and other artists in general, that you can do anything if you just work really hard."
Posted by Unknown at 10:49