"If you think about the biggest songs in our genre, the majority of them have been ballads," says the singer-songwriter 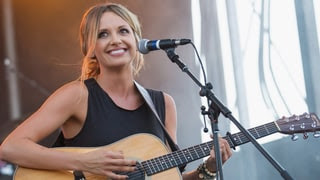 With the release of her debut single "Every Little Thing," Carly Pearce has been turning heads in Nashville. The song ­– a ballad – has impressed critics and fans alike, and roared into country radio's Top 10. It's no easy feat, considering the track's classic sound built on Pearce's bluegrass roots.
"I think everybody comes from different backgrounds of what you grew up listening to and what was around you and at your disposal, and for me it was country music and bluegrass," she tells Rolling Stone Country. "People like Alison Krauss and the Dobro by Jerry Douglas from her band, it makes the sound.

Pearce co-wrote "Every Little Thing," based on a real-life breakup experience, with her producer Busbee and Emily Shackleton. But the singer says she's not defined by poignant heartbreakers.

"I'm not just a sad girl who writes heartbreak songs and sings about guys who crush my heart. I feel like you're going to hear my influences, my sassy songs, fun songs," she says of her upcoming album. Titled Every Little Thing, the record will be released October 13th and Pearce will hit the road with Brett Young on his Caliville Tour.
Posted by Unknown at 10:46