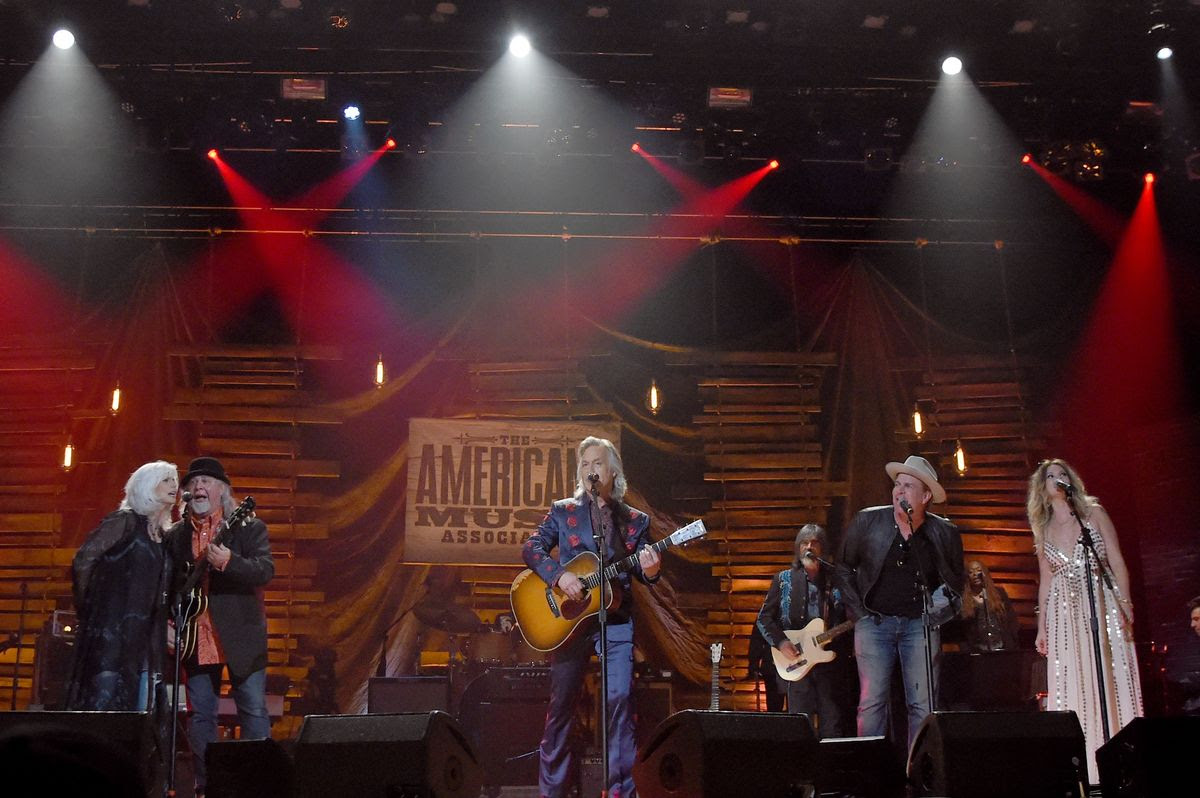 Bluesman Robert Cray and the Hi Rhythm Section delivered the most important underlying message of 2017 Americana Music Honors & Awards when they took the Ryman Auditorium stage to perform “You Must Believe in Yourself.”
No one at Wednesday’s (Sept. 13) ceremony would be where they are today if they ever caved in to self-doubt.

For one night only, the show brought together music legends Van Morrison, John Prine, Graham Nash and more to celebrate the genre’s most talented musicians.
In the awards ceremony portion of the show, the evening’s top winners were Prine, Rodney Crowell and Sturgill Simpson. Prine received artist of the year, Simpson won album of the year for A Sailor’s Guide to Earth and Crowell’s collaboration with Rosanne Cash and John Paul White, “It Ain’t Over Yet,” was named song of the year.

“I’ve been waiting for this award,” Prine said when he accepted his artist of the year award from Beavis and Butt-Head creator Mike Judge. “I’d like to thank everyone at my record company — my little record company that could – Oh Boy Records.” He then namechecked the staff at Oh Boy, his wife Fiona Whelan Prine and members of his touring band.
Both Crowell and Simpson were not present to accept their trophies, which were folk art-inspired hardware designed by Pikeville, Kentucky’s Stef Ratliff. Simpson was on tour overseas and Crowell was unable to attend.
Other winners included Marty Stuart & His Fabulous Superlatives (group/duo of the year), Amanda Shires (emerging artist of the year) and Bob Dylan’s longtime guitarist Charlie Sexton (instrumentalist of the year).
The Lifetime Achievement honorees Nash (Spirit of Americana/Free Speech in Music award), Morrison (songwriting), Iris DeMent (trailblazer), Cray (performance), the Hi Rhythm Section (instrumentalists) and Hightone Records’ Larry Sloven and Bruce Bromberg (executive) each got turns in the spotlight.
Nash, the second foreigner to win the AMA’s Spirit of Americana/Free Speech honor, used his acceptance speech to talk about the impact of American roots music around the world.
“When I first heard about it,” Nash said of the honor, “I wondered why an Englishman was getting an Americana award. [Then] I realized Americana has in fact changed the world. I mean, even in my short life we have jazz, we have the blues, we have some interesting folk singing, we have American rock ‘n’ roll.”
Nash then recalled performing three-part harmony on the Everly Brothers’ “So Sad” with Don and Phil Everly live in 1992. Nash said he still has the ’92 soundboard recording of the performance, and he said, “It kills me to this day.” The Milk Carton Kids then joined him onstage at the AMAs to perform that very song.
Toward the end of the night, Emmylou Harris presented Morrison with his lifetime achievement award. But Morrison didn’t say anything more than a “Thank you,” before he took the stage to sing “Transformation” from his upcoming album Roll With the Punches (out Sept. 22).
DeMent got visibly emotional when Prine presented her with a lifetime achievement honor. Prine compared her voice to a John Steinbeck novel and heaven. After DeMent performed “Morning Glory” solo on a grand piano, Prine joined her onstage for their classic duet “In Spite of Ourselves.”

Producer Lawrence “Boo” Mitchell and musician Steve Jordan presented the Hi Rhythm Section’s Charles Hodges, Leroy Hodges and Archie “Hubbie” Turner with their lifetime achievement award. The Hi Rhythm Section was the house band for Willie Mitchell’s Hi Records and Royal Studios in Memphis, and it had an all-star cast of players including the late guitarist Mabon “Teenie” Hodges; Howard Grimes on drums; Charles on organ; Leroy on bass; and Turner on keys.
The Hi Rhythm Section performed on approximately 26 gold and platinum records including Al Green’s “Love and Happiness,” Ann Peebles’ “I Can’t Stand the Rain,” Otis Clay’s “Tryin’ To Live My Life Without You” and Syl Johnson’s “Dresses Too Short.”
After Vince Gill presented Cray with his lifetime achievement award, the Hi Rhythm Section backed Cray on “You Must Believe in Yourself.”
Family was top-of-mind when Sloven and Bromberg delivered their lifetime achievement acceptance speeches. Their record label Hightone introduced Cray’s music to the world and produced more than 300 albums over 25 years, including music by Dick Dale, Dale Watson, Ramblin’ Jack Elliott, Jimmie Dale Gilmore, Joe Ely and Buddy Miller.
Rounding out the show (which lasted nearly four hours) were performances by Old Crow Medicine Show, Lori McKenna, Rhiannon Giddens, Drive-By Truckers, Hurray for the Riff Raff, the Lumineers, Marty Stuart & His Fabulous Superlatives, and Margo Price, as well as the emerging artist nominees Shires, Brent Cobb, Aaron Lee Tasjan and Sam Outlaw.
Joe Henry and Billy Bragg sang “Gentle on My Mind” in tribute to the late Glen Campbell, and married couple Jason Isbell and Shires sang “If We Were Vampires” from Isbell and the 400 Unit’s The Nashville Sound. The night wrapped with Harris, Jack Ingram, Elizabeth Cook and host Jim Lauderdale covering “Tulsa Time” in tribute to the late Don Williams.
The house band was Larry Campbell, Robbie Crowell, Jim Hoke, Jerry Pentecost, Chris Wood and the McCrary Sisters.