Hurricane Maria made landfall in Puerto Rico as a Category 4 storm on Wednesday morning, according to the National Hurricane Center.
While the storm's maximum sustained winds had dropped to 150 mph by 8 a.m. ET, it still threatened to do severe damage to the U.S. territory. A Category 4 storm has not hit the island since 1932.
The eyewall of Maria was hovering over eastern Puerto Rico as of 8 a.m.
"This is an extremely dangerous and life-threatening situation," the National Hurricane Center warned.
Storm surge was predicted to be 6 to 9 feet in coastal Puerto Rico and the U.S. Virgin Islands. Rainfall totals for Puerto Rico were projected at 12 to 18 inches, with as much as 25 inches in isolated areas.
Maria is forecast to cross Puerto Rico Wednesday, and then approach the Dominican Republic, where conditions will deteriorate Wednesday evening as Maria passes just north of Punta Cana around midnight. 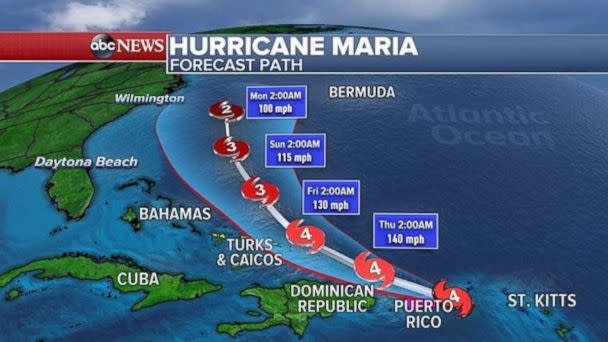 Forecast models currently show the storm traveling east of Florida and the Carolinas.
The storm did severe damage to multiple Caribbean islands over the past 36 hours, including Dominica, Guadeloupe and the Virgin Islands.
Guadeloupe confirmed two people were killed and two others were missing due to the storm.
There was widespread damage across Dominica, as could be seen in the first aerial video from the tiny island taken Tuesday.
Posted by Unknown at 09:46