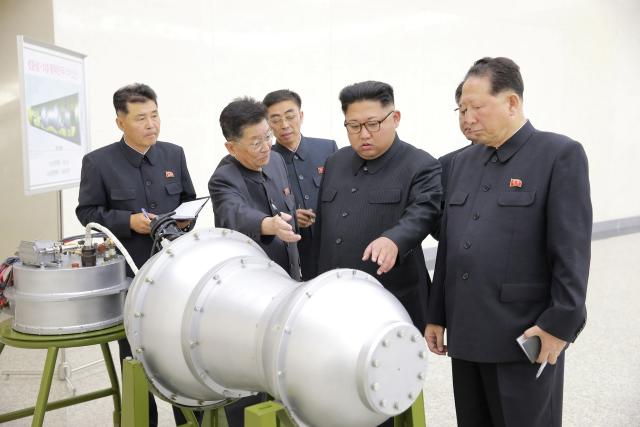 Fiery rhetoric between the U.S. and North Korea has further motivated North Korea’s leader, Kim Jong Un, to develop and launch a nuclear weapon.
North Korea has conducted six underground nuclear tests and a series of successful missile launches. North Korean foreign minister, Ri Yong Ho, says they’re planning to test a hydrogen bomb over the Pacific Ocean. It’s would be the first time North Korea moved its nuclear weapons tests outside its own borders, and experts say it’s a threat that should be taken seriously.
When North Korea said it successfully detonated an underground hydrogen bomb on Sept. 3, a U.S. geological survey said it triggered an earthquake measuring 6.3 on the Richter scale. Experts say this is strong evidence that suggests North Korea is getting close.
So just how dangerous is the hydrogen bomb?
In 1954, when the U.S. tested a hydrogen bomb near Bikini Atoll in the Marshall Islands, it was 1,000 times more powerful than the atomic bomb that leveled Hiroshima during World War II.
The test also left a crater large enough to be seen from space — and the island is still uninhabitable.
A hydrogen bomb uses two nuclear reactions, fission and fusion; an atomic bomb relies on just fission. Both nuclear reactions create a massive amount of energy that results in a bigger explosion. The blast, radiation and heat also reach farther than atomic bombs.
If North Korea’s H-bomb test doesn’t detonate at a high enough altitude, the blast would kill most life in the strike zone. And radioactive particles launched into the air and water could dangerously affect humans and wildlife hundreds of miles away.
Posted by Unknown at 07:11