AMAC Calls on the NFL to Stop Anti-American Protests

AMAC joins Freedom Alliance and other like-minded organizations in demanding that NFL Commissioner, Roger Goodell, put a stop to the anti-American protests at NFL games by their professional athletes. We have sent a letter to Mr. Goodell asking that the league show respect for our flag which is the symbol of our Freedom and was paid for by the lives of American patriots for over 200 years. We ask that you support our efforts by emailing Commissioner Goodell, demanding that he put an end to these insulting anti-American displays.

The Cleveland Browns anthem protest continues to reverberate through the region as residents take sides for and against the on-field activism.
On Thursday, VFW Commander Tim Zvoncheck posted a message to his Facebook page, informing the public that his Strongsville post would no longer air games on Sundays.
Zvoncheck's message reads:


"So tonight, I asked the membership of my post, VFW 3345, what they thought of the Cleveland Browns players kneeling during the National Anthem and the coaching staff backing their decision. Just as I suspected, the "boos" nearly tore the roof off. Effective immediately, VFW Post 3345 will no longer televise any Cleveland Browns games! We will never support any person or organization who disgraces the flag or the anthem that we fought for and so many or our brothers and sisters have died for! Until a formal apology by this organization is publicized and the utter disregard to America ceases, we, as veterans of this great country will not stand for this! We love our Browns, but we love our flag more...God bless America and damn those who think differently!


Anyone that decides to sit during the national anthem or burn the American flag or any other form of disgracing the symbols of our country, should ask themselves where else they would like to live.
Those of us that put our lives on the line for our country, and especially those that made the supreme sacrifice know what freedom means. We know what it means to serve our country. It becomes very nightmarish when the bullets echo past your head and the bombs fill the air with debris, and your buddy is lying motionless on the ground, never to enjoy the blessings of our country again.
I doubt if any of these detractors have ever served our country in combat. If they had, they would respect the hallowed ground that we stand on. It is a real privilege to live in the United States of America and if you don’t like the way we live and respect our laws and our country, maybe there is some other place for you in this world.
DONALD MCKINNON, RIVIERA BEACH 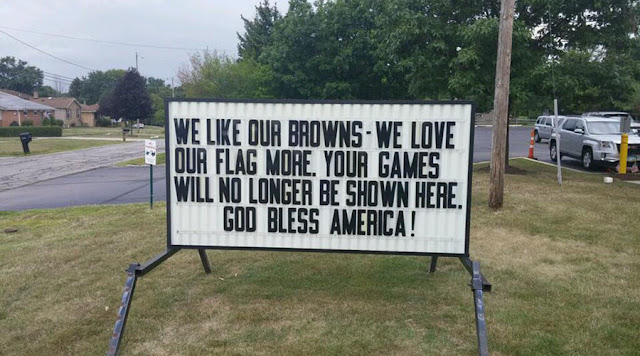 A society of war veterans has labeled stars of the Cleveland Browns a ‘disgrace’ after members of the NFL team staged the league’s largest national anthem protest so far.
More than a dozen Browns players hunkered down on one knee during the Star-Spangled Banner before their preseason game against the New York Giants Monday.
Last year, former San Francisco 49ers quarterback Colin Kaepernick became the first to kneel during the US national anthem. His protest against social injustice, specifically the number of people of color being killed by US police, has since inspired his fellow professionals in the ranks of the NFL.