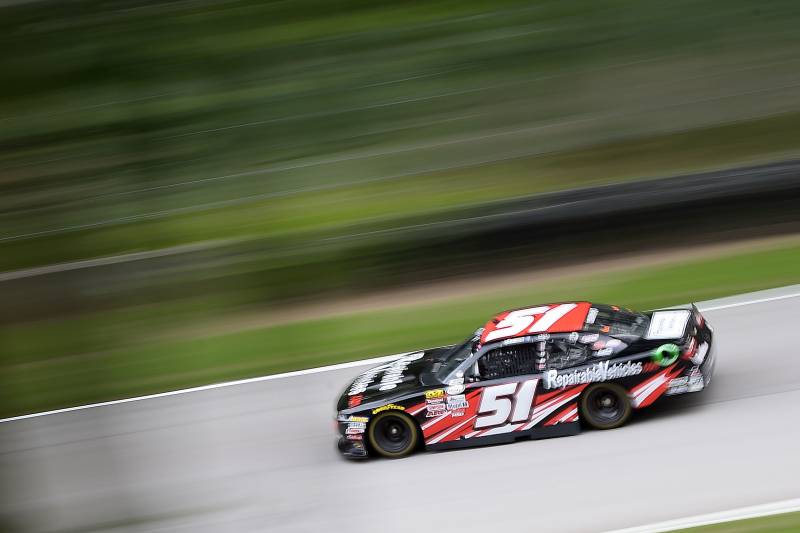 While this was an entertaining day of racing from start to finish, the last couple of laps truly told the story.
Clements was chasing Tifft, looking for any opportunity to pass him for first place. There was eventually contact near the white flag, causing both drivers to spin out, but Clements recovered quickly to pull away for the lead.

Annett was in third at the time but was far enough back that he couldn't catch Clements, who held on for the victory.
Kelly Crandall of NASCAR.com described the game-changing move:

Clements ended up leading 10 laps in the short road race for the biggest performance of his career.
Fellow NASCAR drivers were excited about the finish:

Qualifying for this event was canceled due to rain, which put Austin Cindric on the pole for the road course.
James Davison took over immediately and maintained control of the action, leading to a stage win after 10 laps while staying more than two seconds in front of Justin Marks.

The second stage began with Elliott Sadler winning a three-wide restart after Davison was sent to the back of the line for speeding on pit road. Sadler again stayed in front of the field on a second restart after a caution, but he lost his lead to Daniel Hemric a few laps before the end of Stage 2.
The No. 21 car kept the lead for the Stage 2 victory.
Of course, the bigger story on Lap 20 was the multi-car crash that impacted several key drivers:
Nick DeGroot of Motorsport.com described the action:

Davison went to the garage after the collision, although Marks and Ross Chastain were able to return to the track.
A speeding penalty for Hemric pushed Clements into first place for the first time, where he remained for the next eight laps. A pit stop opened things up for Tifft to move in front, but Clements quickly returned close to the front of the pack.
Tifft did everything he could to stay in front, but the No. 51 car was too aggressive to hold down as he earned the checkered flag.
The season continues for the Xfinity Series next week with only a few races left before the start of the playoffs. Saturday's Sport Clips Haircuts VFW 200 at Darlington Raceway is one of three events remaining as the drivers try to stay alive in the hunt for a championship.
Posted by Unknown at 12:32