August 8th...This Day in History (Now with links to other events) 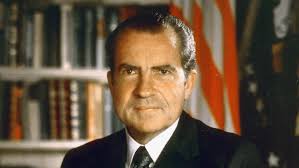 In an evening televised address, President Richard M. Nixon announces his intention to become the first president in American history to resign. With impeachment proceedings underway against him for his involvement in the Watergate affair, Nixon was finally bowing to pressure from the public and Congress to leave the White House. “By taking this action,” he said in a solemn address from the Oval Office, “I hope that I will have hastened the start of the process of healing which is so desperately needed in America.”
Just before noon the next day, Nixon officially ended his term as the 37th president of the United States. Before departing with his family in a helicopter from the White House lawn, he smiled farewell and enigmatically raised his arms in a victory or peace salute. The helicopter door was then closed, and the Nixon family began their journey home to San Clemente, California. Minutes later, Vice President Gerald R. Ford was sworn in as the 38th president of the United States in the East Room of the White House. After taking the oath of office, President Ford spoke to the nation in a television address, declaring, “My fellow Americans, our long national nightmare is over.” He later pardoned Nixon for any crimes he may have committed while in office, explaining that he wanted to end the national divisions created by the Watergate scandal.
On June 17, 1972, five men, including a salaried security coordinator for President Nixon’s reelection committee, were arrested for breaking into and illegally wiretapping the Democratic National Committee headquarters in the Washington, D.C., Watergate complex. Soon after, two other former White House aides were implicated in the break-in, but the Nixon administration denied any involvement. Later that year, reporters Carl Bernstein and Bob Woodward of The Washington Post discovered a higher-echelon conspiracy surrounding the incident, and a political scandal of unprecedented magnitude erupted.
In May 1973, the Senate Select Committee on Presidential Campaign Activities, headed by Senator Sam Ervin of North Carolina, began televised proceedings on the rapidly escalating Watergate affair. One week later, Harvard law professor Archibald Cox was sworn in as special Watergate prosecutor. During the Senate hearings, former White House legal counsel John Dean testified that the Watergate break-in had been approved by former Attorney General John Mitchell with the knowledge of White House advisers John Ehrlichman and H.R. Haldeman, and that President Nixon had been aware of the cover-up. Meanwhile, Watergate prosecutor Cox and his staff began to uncover widespread evidence of political espionage by the Nixon reelection committee, illegal wiretapping of thousands of citizens by the administration, and contributions to the Republican Party in return for political favors.
In July, the existence of what were to be called the Watergate tapes–official recordings of White House conversations between Nixon and his staff–was revealed during the Senate hearings. Cox subpoenaed these tapes, and after three months of delay President Nixon agreed to send summaries of the recordings. Cox rejected the summaries, and Nixon fired him. His successor as special prosecutor, Leon Jaworski, leveled indictments against several high-ranking administration officials, including Mitchell and Dean, who were duly convicted.
Public confidence in the president rapidly waned, and by the end of July 1974 the House Judiciary Committee had adopted three articles of impeachment against President Nixon: obstruction of justice, abuse of presidential powers, and hindrance of the impeachment process. On July 30, under coercion from the Supreme Court, Nixon finally released the Watergate tapes. On August 5, transcripts of the recordings were released, including a segment in which the president was heard instructing Haldeman to order the FBI to halt the Watergate investigation. Three days later, Nixon announced his resignation.