July 7th...This Day in History (Now with links to other events) 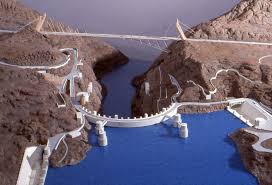 On this day in 1930, construction of the Hoover Dam begins. Over the next five years, a total of 21,000 men would work ceaselessly to produce what would be the largest dam of its time, as well as one of the largest manmade structures in the world.
Although the dam would take only five years to build, its construction was nearly 30 years in the making. Arthur Powell Davis, an engineer from the Bureau of Reclamation, originally had his vision for the Hoover Dam back in 1902, and his engineering report on the topic became the guiding document when plans were finally made to begin the dam in 1922.
Herbert Hoover, the 31st president of the United States and a committed conservationist, played a crucial role in making Davis’ vision a reality. As secretary of commerce in 1921, Hoover devoted himself to the erection of a high dam in Boulder Canyon, Colorado. The dam would provide essential flood control, which would prevent damage to downstream farming communities that suffered each year when snow from the Rocky Mountains melted and joined the Colorado River. Further, the dam would allow the expansion of irrigated farming in the desert, and would provide a dependable supply of water for Los Angeles and other southern California communities.
Even with Hoover’s exuberant backing and a regional consensus around the need to build the dam, Congressional approval and individual state cooperation were slow in coming. For many years, water rights had been a source of contention among the western states that had claims on the Colorado River. To address this issue, Hoover negotiated the Colorado River Compact, which broke the river basin into two regions with the water divided between them. Hoover then had to introduce and re-introduce the bill to build the dam several times over the next few years before the House and Senate finally approved the bill in 1928.
In 1929, Hoover, now president, signed the Colorado River Compact into law, claiming it was “the most extensive action ever taken by a group of states under the provisions of the Constitution permitting compacts between states.”
Once preparations were made, the Hoover Dam’s construction sprinted forward: The contractors finished their work two years ahead of schedule and millions of dollars under budget. Today, the Hoover Dam is the second highest dam in the country and the 18th highest in the world. It generates enough energy each year to serve over a million people, and stands, in Hoover Dam artist Oskar Hansen’s words, as “a monument to collective genius exerting itself in community efforts around a common need or ideal.”