June 9th...This Day in History (Now with links to other events) 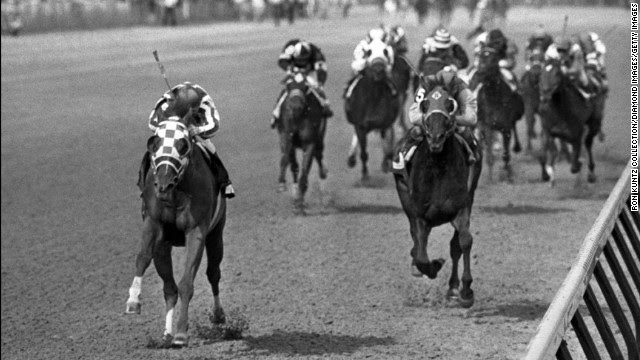 With a spectacular victory at the Belmont Stakes, Secretariat becomes the first horse since Citation in 1948 to win America’s coveted Triple Crown–the Kentucky Derby, the Preakness, and the Belmont Stakes. In one of the finest performances in racing history, Secretariat, ridden by Ron Turcotte, completed the 1.5-mile race in 2 minutes and 24 seconds, a dirt-track record for that distance.
Secretariat was born at Meadow Stables in Doswell, Virginia, on March 30, 1970. He was sired by Bold Ruler, the 1957 Preakness winner, and foaled by Somethingroyal, which came from a Thoroughbred line known for its stamina. An attractive chestnut colt, he grew to over 16 hands high and was at two years the size of a three-year-old. He ran his first race as a two-year-old on July 4, 1972, a 5 1/2-furlong race at Aqueduct in New York City. He came from behind to finish fourth; it was the only time in his career that he finished a race and did not place. Eleven days later, he won a six-furlong race at Saratoga in Saratoga Springs, New York, and soon after, another race. His trainer, Lucien Laurin, moved him up to class in August, entering him in the Sanford Stakes at Saratoga, which he won by three lengths. By the end of 1972, he had won seven of nine races.
With easy victories in his first two starts of 1973, Secretariat seemed on his way to the Triple Crown. Just two weeks before the Kentucky Derby, however, he stumbled at the Wood Memorial Stakes at Aqueduct, coming in third behind Angle Light and Sham. On May 5, he met Sham and Angle Light again at the Churchill Downs track in Louisville for the Kentucky Derby. Secretariat, a 3-to-2 favorite, broke from near the back of the pack to win the 2 1/4-mile race in a record 1 minute and 59 seconds. He was the first to run the Derby in less than two minutes and his record still stands. Two weeks later, at Pimlico Race Course in Baltimore, Maryland, Secretariat won the second event of the Triple Crown: the Preakness Stakes. The official clock malfunctioned, but hand-recorded timers had him running the 1 1/16-mile race in record time.
On June 9, 1973, almost 100,000 people came to Belmont Park near New York City to see if “Big Red” would become the first horse in 25 years to win the Triple Crown. Secretariat gave the finest performance of his career in the Belmont Stakes, completing the 1.5-mile race in a record 2 minutes and 24 seconds, knocking nearly three seconds off the track record set by Gallant Man in 1957. He also won by a record 31 lengths. Ron Turcotte, who jockeyed Secretariat in all but three of his races, claimed that at Belmont he lost control of Secretariat and that the horse sprinted into history on his own accord.
Secretariat would race six more times, winning four and finishing second twice. In November 1973, the “horse of the century” was retired and put to stud at Claiborne Farm in Paris, Kentucky. Among his notable offspring is the 1988 Preakness and Belmont winner, Risen Star. Secretariat was euthanized in 1989 after falling ill. An autopsy showed that his heart was two and a half times larger than that of the average horse, which may have contributed to his extraordinary racing abilities. In 1999, ESPN ranked Secretariat No. 35 in its list of the Top 50 North American athletes of the 20th century, the only non-human on the list.