June 5th...This Day in History (Now with links to other events) 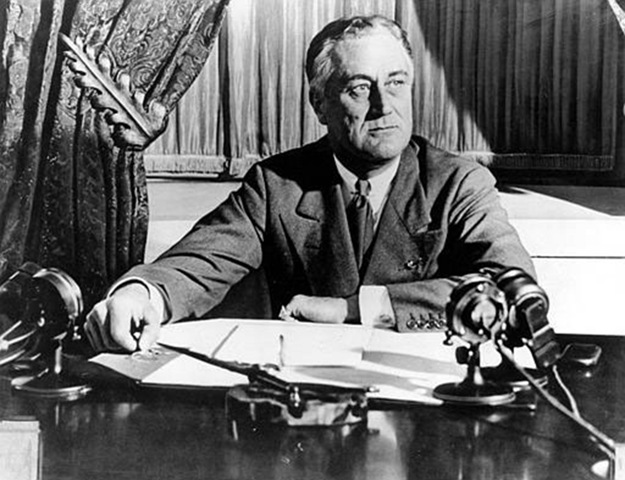 On June 5, 1933, the United States went off the gold standard, a monetary system in which currency is backed by gold, when Congress enacted a joint resolution nullifying the right of creditors to demand payment in gold. The United States had been on a gold standard since 1879, except for an embargo on gold exports during World War I, but bank failures during the Great Depression of the 1930s frightened the public into hoarding gold, making the policy untenable.
Soon after taking office in March 1933, Roosevelt declared a nationwide bank moratorium in order to prevent a run on the banks by consumers lacking confidence in the economy. He also forbade banks to pay out gold or to export it. According to Keynesian economic theory, one of the best ways to fight off an economic downturn is to inflate the money supply. And increasing the amount of gold held by the Federal Reserve would in turn increase its power to inflate the money supply. Facing similar pressures, Britain had dropped the gold standard in 1931, and Roosevelt had taken note.
On April 5, 1933, Roosevelt ordered all gold coins and gold certificates in denominations of more than $100 turned in for other money. It required all persons to deliver all gold coin, gold bullion and gold certificates owned by them to the Federal Reserve by May 1 for the set price of $20.67 per ounce. By May 10, the government had taken in $300 million of gold coin and $470 million of gold certificates. Two months later, a joint resolution of Congress abrogated the gold clauses in many public and private obligations that required the debtor to repay the creditor in gold dollars of the same weight and fineness as those borrowed. In 1934, the government price of gold was increased to $35 per ounce, effectively increasing the gold on the Federal Reserve’s balance sheets by 69 percent. This increase in assets allowed the Federal Reserve to further inflate the money supply.
The government held the $35 per ounce price until August 15, 1971, when President Richard Nixon announced that the United States would no longer convert dollars to gold at a fixed value, thus completely abandoning the gold standard. In 1974, President Gerald Ford signed legislation that permitted Americans again to own gold bullion.