May 6th...This Day in History (Now with links to other events) 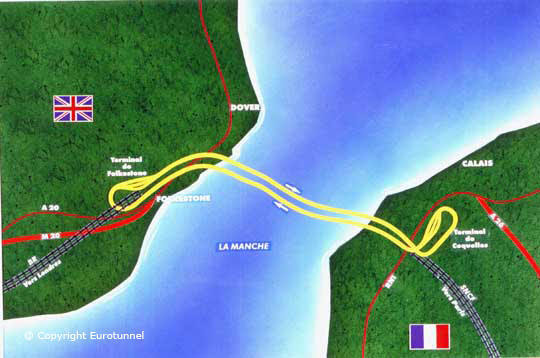 In a ceremony presided over by England’s Queen Elizabeth II and French President Francois Mitterand, a rail tunnel under the English Channel was officially opened, connecting Britain and the European mainland for the first time since the Ice Age.
The channel tunnel, or “Chunnel,” connects Folkstone, England, with Sangatte, France, 31 miles away. The Chunnel cut travel time between England and France to a swift 35 minutes and eventually between London and Paristo two-and-a-half hours.
As the world’s longest undersea tunnel, the Chunnel runs under water for 23 miles, with an average depth of 150 feet below the seabed. Each day, about 30,000 people, 6,000 cars and 3,500 trucks journey through the Chunnel on passenger, shuttle and freight trains.
Millions of tons of earth were moved to build the two rail tunnels–one for northbound and one for southbound traffic–and one service tunnel. Fifteen thousandpeople were employed at the peak of construction. Ten people were killed during construction.
Napoleon’s engineer, Albert Mathieu, planned the first tunnel under the English Channel in 1802, envisioning an underground passage with ventilation chimneys that would stretch above the waves. In 1880, the first real attempt was made by Colonel Beaumont, who bore a tunnel more than a mile long before abandoning the project. Other efforts followed in the 20th century, but none on the scale of the tunnels begun in June 1988.
The Chunnel’s $16 billion cost was roughly twice the original estimate, and completion was a year behind schedule. One year into service, Eurotunnel announced a huge loss, one of the biggest in United Kingdom corporate history at the time. A scheme in which banks agreed to swap billions of pounds worth of loans for shares saved the tunnel from going under and it showed its first net profit in 1999.
Freight traffic was suspended for six months after a fire broke out on a lorry in the tunnel in November 1996. Nobody was seriously hurt in the incident.
In 1996, the American Society of Civil Engineers identified the tunnel as one of the Seven Wonders of the Modern World.