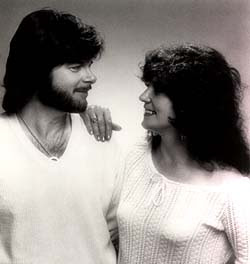 Misty Morgan and her husband Jack Blanchard are so different that nobody can figure out exactly what they are.
Born in Buffalo, New York, Misty was a piano prodigy who entered professional music in pop combos of the sixties. In 1967 she married Jack, a wonderfully off-center songwriter, and they teamed up in Florida to perform jazz, rock, Dixieland, or anything else it took to put bread on the table. Misty hooked up all kinds of electronic devices to her piano, so the two never really needed more band members.
Jack and Misty developed a quirky "stoned" sound, something like Sonny and Cher lost in a poppy field in South Carolina. His "velvet saw" bass voice cuts across her warm dreamy alto, while underneath pulses a steady shuffle beat dotted with harmonica and steel guitar bubbles of sound. Jack's lyrics alternate between totally bizarre novelty nonsense and deeply felt social commentary. They call their distinctive creations "Jack and Misty Productions", so she can be credited as country's trailblazing female record producer. When the wacky "Tennessee Birdwalk" topped the country charts in 1970, Misty Morgan became the first woman in country music to have co-produced a Number One hit. The record crossed over to become a sizable pop hit, as well. The twosome followed this with the equally kooky "Humphrey The Camel," "Fire Hydrant #79," and "The Legendary Chicken Fairy".
But there is more to the beautiful brunette and her long-haired husband than that. "There Must Be More To Life (Than Growing Old)" and "Poor Jody" ruminate on aging. "Bethlehem Steel" is about a discouraged, homesick factory worker. "Big Black Bird" and "The Shadows Of The Leaves" have mystical love lyrics. "Changin' Times" laments the commercialization of modern life. The compelling "Somewhere In Virginia In The Rain" tells the story of a working-class pair's breaking up and reconciliation.
Jack's groaning rasp oozes with soul, while Misty's delectable, behind the beat phrasing anticipated the popularity of stylists such as Willie Nelson. Jack and Misty are still writing, recording, and performing concerts which feature original songs and light comedy.
VITAL STATISTICS: