USS Carl Vinson: One Reason Why the U.S. Navy is the Best in the World (A force to be delt with) 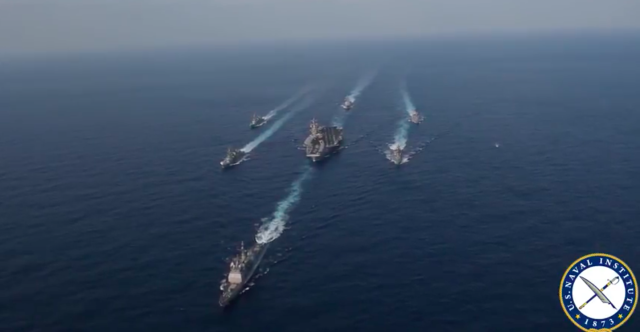 The US Naval Institute recently released a video of the USS Carl Vinson (CVN-70) patrolling the Philippine sea with four Japanese guided-missile destroyers, a US Ticonderoga-class cruiser, and an Arleigh-Berke guided-missile destroyer.
While the Vinson is a long way from home, it's toured the Pacific for decades and never once had to fear for the 70 or so aircraft on board and 7,000 or so sailors working above and below the deck for one big reason — it's escort of the world's most advanced fighting ships.
The Japanese ships excel in anti-submarine and anti-surface warfare with powerful missiles, the US destroyer and cruiser can slap down nearly any threat headed their way with their advanced Aegis radars and interceptor missiles. Furthermore, the US frequently sails with navies across the Pacific, honing communications and skills in the event that they ever need to fight together.
A core tenant of the US Navy, despite having the most and best ships in the world, is to never go it alone. Anywhere the Vinson sails, expect to find guided-missile destroyers armed to the teeth and ready to defend the Vinson while dealing some damage of its own to whatever enemy it may encounter.


The United States has deployed the aircraft carrier USS Carl Vinson to the disputed waters of the South China Sea as part of maritime "routine operations." But in the current scenario, the deployment can be called anything but routine.
China has a long history of maritime disputes with its South China Sea neighbors.
It claims almost all of the South China Sea, including islands more than 800 miles (~1300 km) from the Chinese mainland, despite objections from neighbors such as the Philippines, Malaysia, Brunei and Vietnam.
Beijing has also created artificial islands in the area, outfitting some of them with military features. According to the US, China has reclaimed more than 3,000 acres in the Spratly Islands since 2014.
Though the US takes no position on the territorial dispute in the South China Sea, its warships have conducted routine "freedom of navigation" operations near the reclaimed islands, eliciting warnings from Beijing.
Patrols by USS Carl Vinson, is seen by military experts as a way of sending direct message to China and reassuring the US allies.
In this video, we will analyze HOW POWERFUL USS CARL VINSON IS, AND WHY CHINA FEARS IT?
So, let us get into the details.

USS Carl Vinson (CVN-70) is the third United States Navy Nimitz-class super carrier and is named after Carl Vinson, a Congressman from Georgia, in recognition of his contributions to the US Navy. The ship was launched in 1980, and was commissioned on 13 March 1982.
It has been deployed in Operation Desert Strike, Operation Iraqi Freedom, Operation Southern Watch, and Operation Enduring Freedom.
Notably the body of Osama bin Laden was buried at sea in 2011 from the deck of the Carl Vinson.

USS Carl Vinson being a Nimitz-class aircraft carrier, was designed to be improvements on previous U.S. aircraft carriers, in particular the Enterprise and Forrestal-class.
All 10 Nimitz-class aircraft carriers including Carl Vinson were constructed between 1968 and 2006 at Newport News Shipbuilding Company, Virginia, in the largest dry-dock in the western hemisphere.
These are some of the largest vessels constructed.
USS Carl Vinson has a displacement of 100000 tonnes, and overall length of 332.8 m (1,092 feet). To give viewers a perspective, it is about 3 football fields long.

USS Carl Vinson is powered by two A4W nuclear reactors, kept in separate compartments.
These power 4 propeller shafts and can produce a maximum speed of over 30 knots or 56 km/h.
As a result of the use of nuclear power, the ship is capable of operating continuously for over 20 years without refueling, and is predicted to have a service life of over 50 years.
Practically it has unlimited range & endurance.

The Vinson carries a flight group of more than 60 aircraft, including F-18 jet fighters.
These are twin-engine, supersonic, all-weather carrier-capable 4th generation multirole fighter aircrafts.
They have a payload of 7700 kg (17000 lbs), and can carry ground attack weapons as well as air-to-air missiles.
The versatility of the aircraft can be gauged from the fact that on the first day of Operation Desert Storm, two F 18, each carrying four 2,000 lb. bombs, shot down two Iraqi Migs and then proceeded to deliver their bombs on target.
The flotilla of aircrafts has enough firepower to mount a credible offensive against any Chinese misadventure.

Nimitz class possesses multitude of different radars including electronically scanned array 3D radars.
It is equipped with 16 to 24 RIM-7 Sea Sparrow or NATO Sea Sparrow missiles. RIM-7 Sea Sparrow is a US ship-borne short-range anti-aircraft and anti-missile weapon system, primarily intended for defense against anti-ship missiles. Its range is 19 km.
Close in weapon (CIWS) duties are performed by Phalanx, & RIM-116 Rolling Airframe missile.
Phalanx C I WS has a 4500 /min rate of fire. RIM-116 Rolling Airframe Missiles have speed in excess of 2 Mach.

USS Carl Vinson is not alone, but it leads the U.S. Navy Carrier Strike Group One.
It is accompanied by other vessels including an Arleigh Burke-class guided-missile destroyer, the USS Wayne E Meyer (DDG 108). Arleigh Burke class is considered to be one of the most potent destroyer in the world.
The Carl Vinson strike group’s arrival in the South China Sea brings the United States’ carrier presence in the Asia-Pacific up to 2 groups. The USS Ronald Reagan is permanently forward deployed with the U S Seventh Fleet at Yokosuka, Japan.
This move seems to have made the Chinese nervous.
According to Reuters, Chinese Foreign Ministry spokesman Geng Shuang said at a daily news briefing, “China always respects the freedom of navigation and overflight all littoral countries enjoy under international law,”