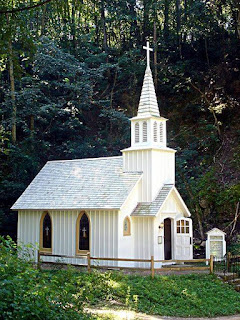 Welcome to the
"Country Chapel"
Service
Sunday
April 30, 2017
Third Sunday
Of Easter
'He Walks Beside Us'

Let us give thanks to the God and Father of our Lord Jesus Christ! For in our union with Christ he has blessed us by giving us every spiritual blessing in the heavenly world.

Then Peter stood up with the other eleven apostles and in a loud voice began to speak to the crowd, "Fellow Jews and all of you who live in Jerusalem, listen to me and let me tell you what this means."
"Listen to these words, fellow Israelites! Jesus of Nazareth was a man whose divine authority was clearly proven to you by all the miracles and wonders which God performed through him. You yourselves know this, for it happened here among you. In accor- dance with his own plan God had decided that Jesus would be handed over to you; and you killed him by letting sinful men cru- cify him. But God raised him from death, setting him free from its power, because it was impossible that death should hold him prisoner. For David said about him,
"I saw the Lord before me at all times; he is near me, and I will not be troubled. And so I am filled with gladness, and my words are full of joy. And I, mortal though I am, will rest assured in hope, be- cause you will not abandon me in the world of the dead; you will not allow your faithful servant to rot in the grave. You have shown me the paths that lead to life, and your presence will fill me with joy."
"My friends, I must speak to you plainly about our famous an- cestor King David. He died and was buried, and his grave is here with us to this very day. He was a prophet, and he knew what God had promised him; God had made a vow that he would make one of David's descendants a king, just as David was. David saw what God was going to do in the future, and so he spoke about the res- urrectin of the Messiah when he said, 'He was not abandoned in the world of the dead; his body did not rot in the grave.' God raised this very Jesus from death, and we are all witnesses to this fact. He has been raised to the right side of God, his Father, and has received from him the Holy Spirit, as he had promised. What you now see and hear is his gift that he has poured out on us."

A Prayer of Confidence

Protect me, O God; I trust in you for safety. I say to the Lord, "You are my Lord; and the good things I have come from you."
You, Lord, are all I have, and you give me all I need; my future is in your hands.
I praise the Lord, because he guides me, and in the night my conscience warns me, I am always aware of the Lord's presence; he is near, and nothing can shake me.
And so I am thankful and glad, and I feel completely secure, because you protect me from the power of death. I have served you faithfully, and you will not abandon me to the world of the dead.
You will show me the path that leads to life; your presence fills me with joy and brings me pleasure forever.

A Call to Holy Living

You call him Father, when you pray to God, who judges all people by the same standard, according to what each one has done; so then, spend the rest of your lives here on earth in reverence for him. For you know what was paid to set you free from the worth- less manner of life handed down by your ancestors. It was not something that can be destroyed, such as silver or gold; it was the costly sacrifice of Christ, who was like a lamb without defect or flaw. He had been chosen by God before the creation of the world and was revealed in these last days for your sake. Through him you believe in God, who raised him from death and gave him glory; and so your faith and hope are fixed on God.

Today's Gospel According to:


The Walk to Emmaus

On that same day two of Jesus' followers were going to a vil- lage named Emmaus, about seven miles from Jerusalem, and they were talking to each other about all the things that had happened. As they talked and discussed, Jesus himself drew near and walked along with them; they saw him, but somehow did not recognize him.
Jesus said to them, "What are you talking about to each other as you walk along?"
They stood still, with sad faces. One of them, named Cleopas, asked him, "Are you the only visitor in Jerusalem who doesn't know the things that have been happening there these last few days?"
"What things?" he asked.
"The things that happened to Jesus of Nazareth," they an- swered. "This man was a prophet and was considered by God and by all the people to be powerful in everything he said and did. Our chief priests and rulers handed him over to be sentenced to death, and he was crucified. And we had hoped that he would be the one who was going to set Israel free! Besides all that, this is now the third day since it happened. Some of the women of our group sur- prised us; they went at dawn to the tomb, but could not find his body. They came back saying they had seen a vision of angels who told them that he is alive. Some of our group went to the tomb and found it exactly as the women had said, but they did not see him."
Then Jesus said to them, "How foolish you are, how slow you are to believe everything the prophets said! Was it not necessary for the Messiah to suffer these things and then to enter his glory?" And Jesus explained to them what was said about himself in all the Scriptures, beginning with the books of Moses and the writings of all the prophets.
As they came near the village to which they were going, Jesus acted as if he were going farther; but they held him back, saying, "Stay with us; the day is almost over and it is getting dark." So he went in to stay with them. He sat down to eat with them, took the bread, and said the blessing; then he broke the bread and gave it to them. Then their eyes were opened and they recognized him, but he disappeared from their sight. They said to each other, "Wasn't it like a fire burning in us when he talked to us on the road and explained the Scriptures to us?"
They got up at once and went back to Jerusalem where they found the eleven disciples gathered together with the others saying, "The Lord is risen indeed! He has appeared to Simon!"
The two then explained what had happened on the road, and how they had recognized the Lord when he broke the bread.

An Interpretation of Today's Readings & Gospel
( By Paul Pennick )

Sometimes we are like the disciples on the road to Emmaus. We are not always aware that Jesus walks beside us. While his image may not be readily apparent, the signs are everywhere. He can be seen in the face of the beggar on the side of the road. He lives and breathes within all victims of violence, the widows, the orphans, the poor and marginalized of the world. He pleads with us not to turn our heads away. He asks us to respond to those in need of comfort, solace and support. In a world filled with many distrac- tions, Jesus asks us to open our hearts, and turn our eyes and rec- ognize his presence.

3)  Scripture-Text Datebook
Posted by Unknown at 00:00