April 26th...This Day in History (Now with links to other events) 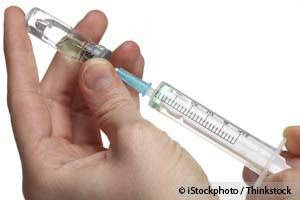 On this day in 1954, the Salk polio vaccine field trials, involving 1.8 million children, begin at the Franklin Sherman Elementary School in McLean, Virginia. Children in the United States, Canada and Finland participated in the trials, which used for the first time the now-standard double-blind method, whereby neither the patient nor attending doctor knew if the inoculation was the vaccine or a placebo. On April 12, 1955, researchers announced the vaccine was safe and effective and it quickly became a standard part of childhood immunizations in America. In the ensuing decades, polio vaccines would all but wipe out the highly contagious disease in the Western Hemisphere.
Polio, known officially as poliomyelitis, is an infectious disease that has existed since ancient times and is caused by a virus. It occurs most commonly in children and can result in paralysis. The disease reached epidemic proportions throughout the first half of the 20th century. During the 1940s and 1950s, polio was associated with the iron lung, a large metal tank designed to help polio victims suffering from respiratory paralysis breathe.
President Franklin Roosevelt was diagnosed with polio in 1921 at the age of 39 and was left paralyzed from the waist down and forced to use leg braces and a wheelchair for the rest of his life. In 1938, Roosevelt helped found the National Foundation for Infantile Paralysis, later renamed the March of Dimes. The organization was responsible for funding much of the research concerning the disease, including the Salk vaccine trials.
The man behind the original vaccine was New York-born physician and epidemiologist Jonas Salk (1914-95). Salk’s work on an anti-influenza vaccine in the 1940s, while at the University of Michigan School of Public Health, led him, in 1952 at the University of Pittsburgh, to develop the inactivated polio vaccine (IPV), based on a killed-virus strain of the disease. The 1954 field trials that followed, the largest in U.S. history at the time, were led by Salk’s former University of Michigan colleague, Dr. Thomas Francis, Jr.
In the late 1950s, Polish-born physician and virologist Albert Sabin (1906-1993) tested an oral polio vaccine (OPV) he had created from a weakened live virus. The vaccine, easier to administer and cheaper to produce than Salk’s, became available for use in America in the early 1960s and eventually replaced Salk’s as the vaccine of choice in most countries.
Today, polio has been eliminated throughout much of the world due to the vaccine; however, there is still no cure for the disease and it persists in a small number of countries in Africa and Asia.