March 14th...This Day in History (Now with links to other events) 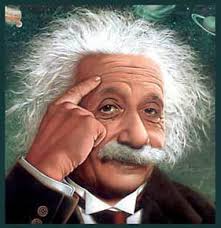 On March 14, 1879, Albert Einstein is born, the son of a Jewish electrical engineer in Ulm, Germany. Einstein’s theories of special and general relativity drastically altered man’s view of the universe, and his work in particle and energy theory helped make possible quantum mechanics and, ultimately, the atomic bomb.
After a childhood in Germany and Italy, Einstein studied physics and mathematics at the Federal Polytechnic Academy in Zurich, Switzerland. He became a Swiss citizen and in 1905 was awarded a Ph.D. from the University of Zurich while working at the Swiss patent office in Bern. That year, which historians of Einstein’s career call the annus mirabilis–the “miracle year”–he published five theoretical papers that were to have a profound effect on the development of modern physics.
In the first of these, titled “On a Heuristic Viewpoint Concerning the Production and Transformation of Light,” Einstein theorized that light is made up of individual quanta (photons) that demonstrate particle-like properties while collectively behaving like a wave. The hypothesis, an important step in the development of quantum theory, was arrived at through Einstein’s examination of the photoelectric effect, a phenomenon in which some solids emit electrically charged particles when struck by light. This work would later earn him the 1921 Nobel Prize in Physics.
In the second paper, he devised a new method of counting and determining the size of the atoms and molecules in a given space, and in the third he offered a mathematical explanation for the constant erratic movement of particles suspended in a fluid, known as Brownian motion. These two papers provided indisputable evidence of the existence of atoms, which at the time was still disputed by a few scientists.
Einstein’s fourth groundbreaking scientific work of 1905 addressed what he termed his special theory of relativity. In special relativity, time and space are not absolute, but relative to the motion of the observer. Thus, two observers traveling at great speeds in regard to each other would not necessarily observe simultaneous events in time at the same moment, nor necessarily agree in their measurements of space. In Einstein’s theory, the speed of light, which is the limiting speed of any body having mass, is constant in all frames of reference. In the fifth paper that year, an exploration of the mathematics of special relativity, Einstein announced that mass and energy were equivalent and could be calculated with an equation, E=mc2.
Although the public was not quick to embrace his revolutionary science, Einstein was welcomed into the circle of Europe’s most eminent physicists and given professorships in Zýrich, Prague, and Berlin. In 1916, he published “The Foundation of the General Theory of Relativity,” which proposed that gravity, as well as motion, can affect the intervals of time and of space. According to Einstein, gravitation is not a force, as Isaac Newton had argued, but a curved field in the space-time continuum, created by the presence of mass. An object of very large gravitational mass, such as the sun, would therefore appear to warp space and time around it, which could be demonstrated by observing starlight as it skirted the sun on its way to earth. In 1919, astronomers studying a solar eclipse verified predictions Einstein made in the general theory of relativity, and he became an overnight celebrity. Later, other predictions of general relativity, such as a shift in the orbit of the planet Mercury and the probable existence of black holes, were confirmed by scientists.
During the next decade, Einstein made continued contributions to quantum theory and began work on a unified field theory, which he hoped would encompass quantum mechanics and his own relativity theory as a grand explanation of the workings of the universe. As a world-renowned public figure, he became increasingly political, taking up the cause of Zionism and speaking out against militarism and rearmament. In his native Germany, this made him an unpopular figure, and after Nazi leader Adolf Hitler became chancellor of Germany in 1933 Einstein renounced his German citizenship and left the country.
He later settled in the United States, where he accepted a post at the Institute for Advanced Study in Princeton, New Jersey. He would remain there for the rest of his life, working on his unified field theory and relaxing by sailing on a local lake or playing his violin. He became an American citizen in 1940.
In 1939, despite his lifelong pacifist beliefs, he agreed to write to President Franklin D. Roosevelt on behalf of a group of scientists who were concerned with American inaction in the field of atomic-weapons research. Like the other scientists, he feared sole German possession of such a weapon. He played no role, however, in the subsequent Manhattan Project and later deplored the use of atomic bombs against Japan. After the war, he called for the establishment of a world government that would control nuclear technology and prevent future armed conflict.
In 1950, he published his unified field theory, which was quietly criticized as a failure. A unified explanation of gravitation, subatomic phenomena, and electromagnetism remains elusive today. Albert Einstein, one of the most creative minds in human history, died in Princeton in 1955.