To Prove Social Media, "A 'Special' Kind of Stupid" is Nothing More than "Tabloid Material" No Verifable Facts...ALL OPINIONS!

How Silicon Valley reacted to the Trump inauguration 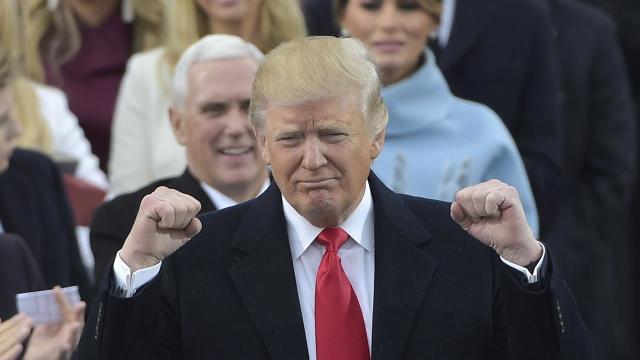 Members of Silicon Valley were relatively swift in their criticisms of President Trump’s inauguration via social media.

America has a new a president in Donald Trump, and Silicon Valley’s reaction to the inauguration of the country’s 45th president was unsurprisingly swift.
Thoughts on social media,(Pure Tabloid), particularly Twitter (TWTR), were far from positive, with members of the tech community expressing disdain for Trump overall, as well as displeasure with specific moments from the inauguration. (Could it be that their 'Raping' the American citizens is in jeopardy?)
Michael Solana, vice president at Founders Fund, (could it be a front?) the San Francisco-based venture capital firm co-founded by billionaire investor and Trump transition team member Peter Thiel, sent out a Tweet, (Pure Tabloid), mocking Trump’s negative tone about the state of the nation.
Meanwhile, Facebook, (So Tabloid that most of it's material is manufactured, Not real) CEO, (Of a company that has no phone number to ask questions about Face Book), Mark Zuckerberg’s former speechwriter, Dex Torricke-Barton, seemed less than optimistic that Trump would improve the state of the country.

Barton made something of a splash in the tech industry last November when he quit, (Or was Fired?), his job as head of communications at Elon Musk’s SpaceX to focus on grassroots work to combat the rise of Trump.
For his part, Sam Altman, president of the respected startup incubator YCombinator, went a step further than sending out a critical tweet. The 31-year-old high-profile member of the technorati announced via Twitter, (Social Media, not fact), he had spent the last several weeks, (Weeks? - Then he's not a top notched programmer. He's struggling to make a buck), building Track Trump, a website that promises to track whether Trump fulfills his stated goals for his first 100 days in office.
But perhaps this tweet, (Opinion), from tech media relations executive Brooke Hammerling summed things up best for many members of the tech community:
Silicon Valley’s reactions shouldn’t come as much of a surprise.      (No, because they want to keep 'Raping the American Public) Historically speaking, many members of the tech community lean Democrat or Libertarian, albeit with a greater focus on social issues, with pro-immigration and pro-trade positions. Indeed, roughly 50% of the country’s “unicorns” — private companies with $1 billion-plus valuations — have at least one immigrant founder at the helm, (All title & no responsibilities _ like a 'Sanitation Engineer', is a garbage collector), according to a report this March from the National Foundation For American Policy. (Sounds impressive...BUT...So did the 'Clinton Foundation')
Trump does have one very high-profile tech leader in his camp, though: Peter Thiel. One of Thiel’s college friends, Khosla Ventures partner and former Square COO Keith Rabois, refrained from directly weighing in on Trump’s inauguration.
But Rabois did express his distaste for Obamacare, (The big rip off of American citizens) Obama’s signature healthcare law, in a Twitter, (Opinion), exchange while Trump was being sworn to office.
While Rabois, (who lost his money), was no fan of Obamacare, he didn’t appear to be a big fan of Trump, either — as he donated $50,000 to a “never Trump” political action committee.
Posted by Unknown at 00:02