January 17th...This Day in History (Now with links to other events) 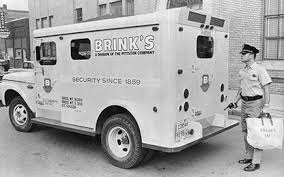 On this day in 1950, 11 men steal more than $2 million from the Brinks Armored Car depot in Boston, Massachusetts. It was the perfect crime–almost–as the culprits weren’t caught until January 1956, just days before the statute of limitations for the theft expired.
The robbery’s mastermind was Anthony “Fats” Pino, a career criminal who recruited a group of 10 other men to stake out the depot for 18 months to figure out when it held the most money. Pino’s men then managed to steal plans for the depot’s alarm system, returning them before anyone noticed they were gone.
Wearing navy blue coats and chauffeur’s caps–similar to the Brinks employee uniforms–with rubber Halloween masks, the thieves entered the depot with copied keys, surprising and tying up several employees inside the company’s counting room. Filling 14 canvas bags with cash, coins, checks and money orders–for a total weight of more than half a ton–the men were out and in their getaway car in about 30 minutes. Their haul? More than $2.7 million–the largest robbery in U.S. history up until that time.
No one was hurt in the robbery, and the thieves left virtually no clues, aside from the rope used to tie the employees and one of the chauffeur’s caps. The gang promised to stay out of trouble and not touch the money for six years in order for the statute of limitations to run out. They might have made it, but for the fact that one man, Joseph “Specs” O’Keefe, left his share with another member in order to serve a prison sentence for another burglary. While in jail, O’Keefe wrote bitterly to his cohorts demanding money and hinting he might talk. The group sent a hit man to kill O’Keefe, but he was caught before completing his task. The wounded O’Keefe made a deal with the Federal Bureau of Investigation (FBI) to testify against his fellow robbers.
Eight of the Brinks robbers were caught, convicted and given life sentences. Two more died before they could go to trial. Only a small part of the money was ever recovered; the rest is fabled to be hidden in the hills north of Grand Rapids, Minnesota. In 1978, the famous robbery was immortalized on film in The Brinks Job, starring Peter Falk.