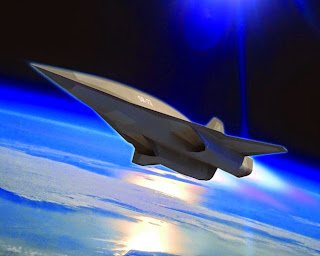 Image: Lockheed Martin
Lockheed Martin's famed Skunk Works has finally unveiled the long-awaited successor to the SR-71 Blackbird. Aviation Week and Space Technology's Guy Norris pulled the covers off the project that Lockheed Martin is simply calling the SR-72. The new airplane will be roughly the same size as the record-setting Blackbird, but will be able to fly twice as fast as the jet that still holds the speed records.
The new spy plane will be capable of Mach 6 cruise speeds, making it the first hypersonic aircraft to enter service should it be produced. Only the rocket-powered North American X-15 was able to regularly fly those speeds, and the three examples built were used for research. The SR-71 Blackbird is legendary in aviation circles for its Mach 3 capabilities, and different iterations served as a spy plane for 35 years until its retirement in 1998. It still holds several records, including a flight from Los Angeles to Washington D.C. in 64 minutes, 20 seconds.
The new SR-72 has long been rumored and debated, and is part of the U.S. Air Force's plan for hypersonic capabilities that will allow fast reaction for gathering intelligence around the world. A Mach 6 airplane fills the gap between current surveillance aircraft that can loiter for long periods of time, but don't have the ability to transit to a new area quickly. The SR-72 is also expected to have optional strike capabilities, according to Aviation Week.
The key to the new airplane, as it was with the SR-71, will be the engines. Lockheed Martin told Aviation Week the company has been working with Aerojet Rocketdyne to build an air breathing engine that combines both a traditional turbine and a scramjet to deliver the Mach 6 performance.
Normal turbine jet engines have problems operating at speeds beyond Mach 2. The original SR-71 used a complicated system of a movable nose cone on the engine, along with vents that prevented shockwaves from interfering with the flow, and slowed the air down enough so that it could be ingested by the engine. Though "unstarts" were a regular problem for Blackbird pilots, and caused problems throughout the life of the airplane.
The new SR-72 will use a turbine-based combined cycle (TBCC) that will employ the turbine engine at lower speeds, and use a scramjet at higher speeds. A scramjet engine is designed to operate at hypersonic velocities by compressing the air through a carefully designed inlet, but needs to be traveling supersonic before it is practical to begin with. So far research projects from NASA, the Air Force and other Pentagon entities have not been able to solve the problem of transitioning from the subsonic flight regime, through hypersonic flight with a single aircraft.
Lockheed Martin told Aviation Week it has found a way to use existing turbine engines, and by lowering the operating speed of the scramjet, make a transition to hypersonic speeds possible.
The aerospace company says it may have a scaled demonstrator of the SR-72 technology flying by 2023. That airplane would be smaller, about the size of the current F-22 fighter and would be optionally piloted. The SR-72 could enter service by 2030.
NNNNNNNNNNNNNNNNNNNNNNNNNNNNNNNNNNNNNNNNNN
Thanks to Dutch
Chihuahua
Parachutist's Record Fall: Over 25 Miles In 15 Minutes
http://www.nytimes.com/2014/10/25/science/alan-eustace-jumps-from-stratosphere-breaking-felix-baumgartners-world-record.html?smid=tw-nytimesscience&_r=1
Alan Eustace Jumps From Stratosphere, Breaking Felix Baumgartner's World Record
By JOHN MARKOFFOCT. 24, 2014 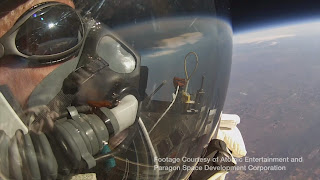 Play Video|1:07
Google Executive Makes World Record Jump
Google Executive Makes World Record Jump
Alan Eustace, a senior vice president at Google, broke the world record for high-altitude jumps.
Video by Atomic Entertainment on Publish Date October 24, 2014. Photo by Atomic Entertainment and Paragon Space Development Corporation.
ROSWELL, N.M. — A well-known computer scientist parachuted from a balloon near the top of the stratosphere on Friday, falling faster than the speed of sound and breaking the world altitude record set just two years ago.
The jump was made by Alan Eustace, 57, a senior vice president of Google. At dawn he was lifted from an abandoned runway at the airport here by a balloon filled with 35,000 cubic feet of helium.
For a little over two hours, the balloon ascended at speeds up to 1,600 feet per minute to an altitude of more than 25 miles. Mr. Eustace dangled underneath in a specially designed spacesuit with an elaborate life-support system. He returned to earth just 15 minutes after starting his fall.
"It was amazing," he said. "It was beautiful. You could see the darkness of space and you could see the layers of atmosphere, which I had never seen before."
Mr. Eustace cut himself loose from the balloon with the aid of a small explosive device and plummeted toward the earth at speeds that peaked at 822 miles per hour, setting off a small sonic boom heard by people on the ground.
Photo 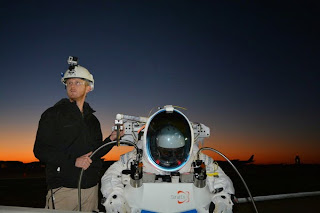 Alan Eustace, in suit, preparing for his ascent on Friday morning. Credit Volker D. Kern/PSDC
"It was a wild, wild ride," he said. "I hugged on to the equipment module and tucked my legs and I held my heading."
He did not feel or hear the boom as he passed the speed of sound, he said. He performed two slow backflips before a small parachute righted him.
His technical team had designed a carbon-fiber attachment that kept him from becoming entangled in the main parachute before it opened. About four-and-a-half minutes into his flight, he opened the main parachute and glided to a landing 70 miles from the launch site.
"To break an aviation record is incredibly significant," said Mark Kelly, the former astronaut, who viewed Mr. Eustace's ascent. "There is an incredible amount of risk. To do it safely is a testament to the people involved."
Mr. Eustace's maximum altitude was initially reported as 135,908 feet. Based on information from two data loggers, the final number being submitted to the World Air Sports Federation is 135,890 feet.
The previous altitude record was set by Austrian daredevil Felix Baumgartner, who jumped from 128,100 feet on Oct. 14, 2012.
Mr. Eustace was carried aloft without the aid of the sophisticated capsule used by Mr. Baumgartner or millions of dollars in sponsorship money. Instead, Mr. Eustace planned his jump in secrecy, working for almost three years with a small group of technologists skilled in spacesuit design, life-support systems, and parachute and balloon technology.
He carried modest GoPro cameras aloft, connected to his ground-control center by an off-the-shelf radio.
Although Mr. Baumgartner was widely known for death-defying feats, Mr. Eustace describes himself as an engineer first with a deep commitment to teamwork. He pilots his own Cessna twin-engine jet and has a reputation in Silicon Valley for thrill-seeking.
Photo 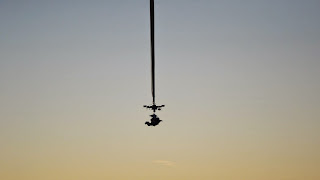