The List 3708
To All,
I hope your week has been going well.
Regards,
Skip
This day in Naval History September 18
1926 - Navy brings relief aid to Miami, FL, after a severe hurricane.
1936 - Squadron 40-T, based in the Mediterranean, established to protect U.S. interests and citizens around Iberian peninsula throughout the Spanish Civil War.
1941 - U.S. Navy ships escort eastbound British trans-Atlantic convoy for first time (Convoy HX-150). Although the U.S. Navy ships joined HX-150, which left port escorted by British ships on 16th, on night of 17 September, the official escort duty began on 18th.
1947 - National Security Act becomes effective
This day in Air Force History
Today, (September 18th 1947) America commemorates the  anniversary of the Air Force. Born of the revolutionary ideas of visionaries, America's Air Force was forged in 20th century combat. The occasion allows us to reflect on where we have been in a century of powered flight and five decades of space flight.
America's airmen survey the planet from airborne, space-based and cyber sensors. These airmen can cover the globe, watching, deterring and defeating enemies with speed, precision and lethality. They are equally capable of delivering humanitarian and disaster relief within hours to anyone in the world.
For the 21st century, we are again revolutionizing our Air Force by incorporating the lessons learned in a century of aerial warfare and by modernizing our force.
The nation requires an interdependent team of soldiers, sailors, airmen and Marines who can defeat a broad range of threats. Your Air Force will continue to be a vital and decisive element of that team – flying, fighting and winning.
NNNNNNNNNNNNNNNNNNNNNNNNNNNNNNNNNNNNNNNNNN
This day in History
18<http://www.epicidiot.com/thisday/td_09_18.htm>
NNNNNNNNNNNNNNNNNNNNNNNNNNNNNNNNNNNNNNNNN
AOL Headline: 'Global Warming Likely to Cause Colder And Snowier Winters, Scientists Say'
By P.J. Gladnick | September 17, 2014 | 4:00 PM EDT
With global warming it is often heads you lose, tails we win. No matter what happens in the weather the answer is always global warming. Is it getting warmer? The answer is global warming. Is it getting colder? The answer is still global warming.
If you think I'm kidding then check out this AOL headline: Global warming likely to cause colder and snowier winters, scientists say. Author Ryan Gorman strains to explain this line of reasoning:
Scientists now believe that global warming is to blame for extreme cold snaps in North America during the winter months – and that it will only keep happening.
The "polar vortex" that plunged Canada and the U.S. into historical cold last winter is said by researchers to have occurred because melting polar ice changes weather patterns, according to a study published earlier this month.
A team of Korean and American scientists asserted in a new study that the melting ice causes the northern jet stream (upper level air flow) to shift south and bring polar air with it.
The polar ice is melting because warmer water is riding the Gulf Stream (ocean currents) from tropical regions of the Atlantic Ocean to an area north of Scandinavia.
...As the atmosphere continues to warm, and ocean water temperatures rise, this effect will only become more pronounced, researchers argue.
The surprising result of global warming, or climate change, will be colder, snowier winters across both countries.
The Eurasian supercontinent also experiences this cooling effect, according to study co-author Seong-Joon Kim.
Uh-huh. The only problem with this explanation is that the Arctic ice has dramatically increased over the past two years as you can read in this Daily Mail article published on September 2:
The most widely used measurements of Arctic ice extent are the daily satellite readings issued by the US National Snow and Ice Data Center, which is co-funded by Nasa. These reveal that – while the long-term trend still shows a decline – last Monday, August 25, the area of the Arctic Ocean with at least 15 per cent ice cover was 5.62 million square kilometres.
This was the highest level recorded on that date since 2006 (see graph, right), and represents an increase of 1.71 million square kilometres over the past two years – an impressive 43 per cent.
Other figures from the Danish Meteorological Institute suggest that the growth has been even more dramatic. Using a different measure, the area with at least 30 per cent ice cover, these reveal a 63 per cent rise – from 2.7 million to 4.4 million square kilometres.
...Crucially, the ice is also thicker, and therefore more resilient to future melting. Professor Andrew Shepherd, of Leeds University and University Coillege, London, an expert in climate satellite monitoring, said yesterday: 'It is clear from the measurements we have collected that the Arctic sea ice has experienced a significant recovery in thickness over the past year.
'It seems that an unusually cool summer in 2013 allowed more ice to survive through to last winter. This means that the Arctic sea ice pack is thicker and stronger than usual, and this should be taken into account when making predictions of its future extent.'
Yet for years, many have been claiming that the Arctic is in an 'irrevocable death spiral', with imminent ice-free summers bound to trigger further disasters. These include gigantic releases of methane into the atmosphere from frozen Arctic deposits, and accelerated global warming caused by the fact that heat from the sun will no longer be reflected back by the ice into space.
Judith Curry, professor of earth and atmospheric sciences at Georgia Institute of Technology in Atlanta, said last night: 'The Arctic sea ice spiral of death seems to have reversed.'
Those who just a few years ago were warning of ice-free summers by 2014 included US Secretary of State John Kerry, who made the same bogus prediction in 2009, while Mr Gore has repeated it numerous times – notably in a speech to world leaders at the UN climate conference in Copenhagen in 2009, in an effort to persuade them to agree a new emissions treaty.
The Daily Mail graphic below demonstrates the dramatic increase in Arctic Sea ice over the past two years. 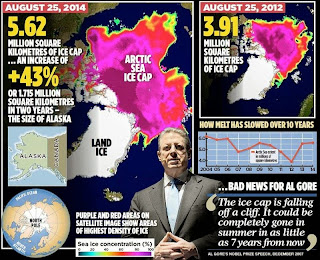 11 Surprising Factors That Mess With Your Memory

By Dr. Mercola
Fear of losing your mind is a pervasive, fear. Among Americans, the notion of losing mental capacity evokes twice as much fear as losing physical ability, and 60 percent of US adults say they are very or somewhat worried about memory loss.1
The good news is that your brain is a dynamic organ, constantly adapting and changing, for better or for worse. Many daily activities such as, lack of sleep can seriously interfere  with your memory the next day.
On the other hand, a healthy lifestyle will support your brain health and even encourage your brain to grow new neurons, a process known as neurogenesis or neuroplasticity.
Your brain's hippocampus, i.e. the memory center, is especially able to grow new cells and it's now known that your hippocampus regenerates throughout your entire lifetime (even into your 90s), provided you give it the tools to do so.
Many of the most powerful interventions for memory are also the simplest. So if you'd like to boost your memory, and protect it against negative changes, keep reading. The 11 factors that follow, as reported by TIME,2 all have the potential to mess with your memory (some in a good way and others a bad way).

11 Surprising Factors That Affect Your Memory

If you're serious about improving your memory and your cognitive function, you'll also want to know about these three important variables for brain health.
Vitamin D
Activated vitamin D receptors increase nerve growth in your brain, and researchers have also located metabolic pathways for vitamin D in the hippocampus and cerebellum of the brain, areas that are involved in planning, processing of information, and the formation of new memories. In older adults, research has shown that low vitamin D levels are associated with poorer brain function, and increasing levels may help keep older adults mentally fit. Appropriate sun exposure is all it takes to keep your levels where they need to be for healthy brain function. If this is not an option, a safe tanning bed is the next best alternative, followed by a vitamin D3 supplement.
Intermittent Fasting
Your ancient ancestors never had access to food 24/7 so your genes are optimized for periods of feast and fasting. Problem is most of us are in 24 hour feast mode.  Intermittent fasting can help your body to "reset" itself and start to burn fat instead of sugar. Further, it will help you to reduce your overall calorie consumption, which promotes brain cell growth and connectivity.
As part of a healthy lifestyle, however, I prefer an intermittent fasting schedule that simply calls for limiting your eating to a narrower window of time each day. By restricting your eating to a 6-8 hour window, you effectively fast 16-18 hours each day. To learn more, please see this previous intermittent fasting article.
Gut Health
Your gut is your "second brain," and your gut bacteria transmits information to your brain via the vagus nerve, the tenth cranial nerve that runs from your brain stem into your enteric nervous system (the nervous system of your gastrointestinal tract). There is a close connection between abnormal gut flora and abnormal brain development, and just as you have neurons in your brain, you also have neurons in your gut -- including neurons that produce neurotransmitters like serotonin, which is also found in your brain and is linked to mood.
Quite simply, your gut health can impact your brain function, psyche, and behavior, as they are interconnected and interdependent in a number of different ways. In addition to avoiding sugar, one of the best ways to support gut health is to consume beneficial bacteria. You can use a probiotic supplement for this, but I'm particularly fond of using fermented vegetables, because they can deliver extraordinarily high levels of beneficial bacteria. Most people aren't aware that in a healthy serving of sauerkraut – two to three ounces or so – you're getting the equivalent of nearly 100 capsules of the highest-potency probiotic you can buy. It's clearly one of the most cost-effective alternatives.

And Remember the Most Important Factor of All... Your Diet